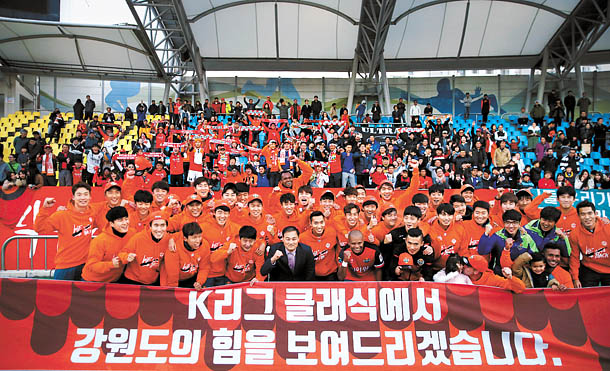 Gangwon FC players celebrates their promotion to the top-flight K-League Classic on Sunday at Tancheon Sports Complex in Seongnam, Gyeonggi. While Gangwon was promoted, Seongnam FC, the winningest club in the league with seven Classic title, was relegated to second-tier K-League Challenge after the promotion playoffs. [K-LEAGUE]

When the referee blew the whistle to end Sunday’s match, almost every Seongnam FC player collapsed as if hit by a bullet. The Tancheon Sports Complex in Seongnam, Gyeonggi, was silent. Hwang Ui-jo, the team’s lead scorer, lay still. Veteran midfielder Hwang Jin-sung was motionless, too. Only Kim So-heon, Seongnam’s captain, was on his feet, walking around to console his teammates.

The stark sight of players dressed in black and lying on the field contrasted so sharply with that of Gangwon FC’s players, who wore white and hopped about like deer, that the scene looked like an overwrought theatrical meditation on victory and defeat. And since no overwrought bit of theater would be complete without a heavy spoonful of irony, it deserves mention that Gangwon will be moving on the K-League Classic while Seongnam, the winningest club in the K-League, with seven Classic titles to its name, will be relegated to the second-tier K-League Challenge.

Seongnam fans must be stunned to see their champions fall, but they shouldn’t be. Throughout the season, the writing was on the wall; Seongnam was unable to move up in the standings and eventually finished second to last in the K-League Classic with 11 wins, 10 draws and 17 losses. After the first game of the promotion playoffs, which concluded with a roundly disappointing goalless tie, the second game of the playoffs on Sunday ended in another draw. But this time around, Gangwon netted the opening goal before the interval. Seongnam was able to equalize the match. However, since away goals work as tiebreakers in the case of a draw, one goal scored at home wasn’t enough for Seongnam to overcome Gangwon in the two-game series.

Their fall began in September when their manager, Kim Hak-bum, who has been with Seongnam since 2014, was sacked after Seongnam fell to seventh in the standings. It was a rough patch, but possibly not the best call since Kim, after all, was the man who raised Seongnam up and led the team to FA cup victory in 2014. But management Gu Sang-bum in the saddle, defended their decision against concerns and claimed that with Gu, they would be able to enter the upper group of the split round. Only things didn’t turn out that way. Seongnam continued its downward spiral, managing to snap up only one win from nine games on its race to the bottom.

Then just before the promotion playoffs, Gu announced he was stepping down to assume responsibility for the team’s poor showing, which meant the team was now riding blind. Byun Sung-hwan, who had led the youth team, was brought on as a stopgap measure, but at this point it seemed to some they were simply moving the deck chairs around on the Titanic.

Meanwhile, Gangwon has returned to the top league for the first time in four years, after being demoted to the second-tier Challenge in 2013. Choi Yun-kyum, the team’s manager, said, “It’s been a while since we left the Classic and it’s good to be back.”

No doubt he meant this in more ways than one, as the team has had to contend with a number of controversies since its absence, including a corruption scandal and conflict with the Gangwon provincial government that led to some club officials being indicted earlier this year on embezzlement and fraud charges.

Despite that time, Choi and the players fought on.

After Cho Tae-ryong became the CEO, Gangwon went on a recruiting spree, bringing on players such as Park Hee-do, a midfielder who played for FC Seoul and Jeonbuk Hyundai Motors, the winners and runners-up of this year’s K-League Classic, and Luiz Henrique, a Brazilian striker who played for Jeonbuk last season. Filling up their squad with Classic-level players, Gangwon was ready to take their shot.

“The players executed the plays well,” said Choi, “and I’m grateful for them for giving me this honor.”