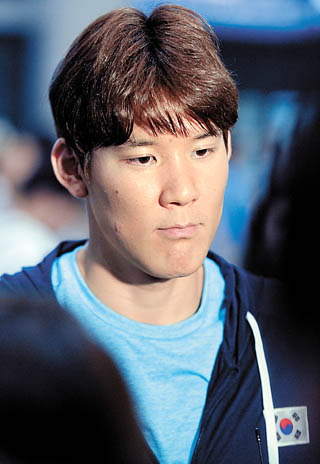 While the corruption scandal involving President Park Geun-hye and her confidante, Choi Soon-sil, has sparked fury across the nation, it was recently discovered that Choi’s associates tried to manipulate national sports icons - such as Park Tae-hwan, a former Olympic swimming champion - into failing.

Amid the rising controversy involving Choi Soon-sil’s influence over state affairs, Seoul Broadcasting System (SBS), a national television and radio network, reported on Saturday that Kim Chong, former vice culture minister, pressured Park not to compete in the 2016 Rio Olympics. The swimmer became an iconic figure in Korea after winning gold at the 2008 Beijing Games and ending Korea’s medal drought in the event. Korea has earned one gold and three silvers in swimming from the Summer Games, all of which belong to Park.

Kim allegedly blackmailed Park to follow a Korean Olympic Committee (KOC) regulation, which stipulates that an athlete who was barred by an international sports organization cannot represent the country for three years after his or her ban expires. After Park’s 18-month ban by the International Swimming Federation was lifted in March, Park went into a legal battle against the KOC, arguing that the rule was a case of double-jeopardy. He eventually took the case all the way to the Switzerland-based Court of Arbitration for Sports (CAS), an independent institution that mediates disputes between athletes and domestic sports bodies. The CAS ruled in his favor and the KOC followed suit and allowed Park to compete in Rio, where Park went medal-less after failing to make it out of the heats in all the events he competed in.

During the meeting between Kim and Park in May, Kim blackmailed the swimmer, telling Park that if he gave up his attempt to compete in the Rio Games, he would be given various perks, including a corporate sponsorship and professorship at Dankook University, Park’s alma mater. Kim also said if Park refused the offer and went to Rio, he will be at a “disadvantage.” Kim, a former professor at Hanyang University in Seoul, is accused of giving business favors to Choi and helping her daughter, Chung Yoo-ra, become a national dressage athlete. Kim resigned from his post last month.

While the report went viral in Korea, Park was competing in the 10th Asian Swimming Championships in Tokyo over the weekend, the first major international event he has competed in since the Rio Olympics. Park claimed four golds from the regional meet - in the 100-meter, 200-meter, 400-meter and 1,500-meter freestyle events. His 200-meter time, one minutes and 45.16 seconds, puts him second in the world this year, after Sun Yang of China, who has a time of 1:44.63.

Holding a press conference in Tokyo after the meet on Monday, Park said while he was scared of Kim Chong, he only thought about participating in the Summer Games.

“I had so many things on my mind then and I was also nervous,” recollected Park. “But he was in a high-ranking position and frankly I was scared when he told me all these things. I wondered whether I would be able to handle all the burdens and responsibility. But aside from all that, as an athlete, I thought going to the Olympics was the most important of all. Other than that, I was just too nervous so I sat and listened.”

When asked whether the incident has affected his performance in the pool, Park said, “The Olympics is no school-yard competition. An athlete representing a country must be able to focus in the race and perform at peak condition. Unfortunately for me, I had some things on my mind that I had to think about. Mentally, I wasn’t fully ready [during the Olympics]. But frankly, I don’t want to make excuses. I just regret that I failed to meet the expectations of fans in Korea.”

He added, “If I had a second thought [after talking to Kim], I would not have gone to the Olympics. More so than corporate sponsorship or professorship, I focused on going to the Olympics and how to get there.”