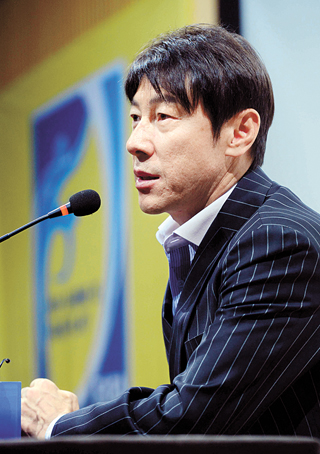 Shin Tae-yong, currently a coach of the senior national football team of Korea, has been appointed as the skipper of the U-19 football team, according to the nation’s football governing body.

The Korea Football Association announced on Tuesday that Shin, former manager of the Olympics football team, will be heading the U-19 football team. Shin led the Korean team to the quarterfinals of the 2016 Rio Olympics until Korea was ousted from the tournament in a 0-1 upset by Honduras. In the past, Shin oversaw Seongnam FC of the K-League and led the team to take trophies from the Asian Champions League in 2010 and Korean FA Cup in 2011.

Since An Ik-soo resigned from the post last month, Jung Jung-yong has been the team’s caretaker, leading the youth team to win the 2016 Suwon Continental Cup. The Suwon Continental Cup is an international friendly football competition, where Korea hosts U-19 teams from Iran, England and Nigeria.

After taking the managerial post, Shin will be stepping down from his job with the senior team. Shin and the U-19 team will be preparing for the FIFA U-20 World Cup which takes place in Korea next year from May to June.

Kim Yuna to be inducted into Korean Hall of Fame

The Korean Olympic Committee (KOC) will hold the induction ceremony at 11 a.m. in Seoul. The KOC announced last month that Kim has been selected as this year’s “Sports Hero.” Kim, now a retired winter Olympic champion, won gold in the 2010 Vancouver Winter Games, ending Korea’s drought in the event. Before Kim, the only other events in which Korea won a medal during the Winter Olympics were short track speed skating and speed skating. Korea has, so far, won one gold and one silver in figure skating, both of which belong to Kim.