Wit discusses diplomatic paths with the North under Trump

Wit discusses diplomatic paths with the North under Trump 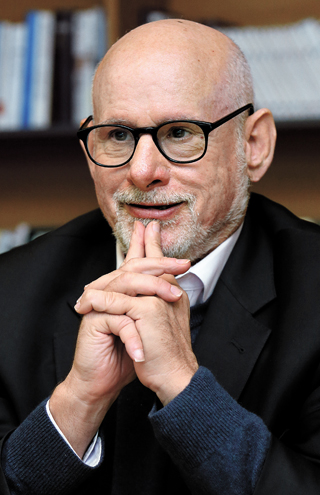 Joel Wit, Senior fellow at the U.S.-Korea Institute at Johns Hopkins University and founder of the website 38 North

North Korean diplomats last weekend headed to Switzerland to hold talks with U.S. experts during the transition to a Donald J. Trump administration, a time in which the new American president is forming his policy toward Pyongyang.

The North Korean delegation included Jang Il-hun, North Korea’s deputy ambassador to the UN, and Choe Son-hui, a deputy director general of the U.S. Affairs Department of the North’s Foreign Ministry, who arrived in Geneva Thursday for talks that are expected to run through Saturday.

The U.S. delegation for the so-called “Track Two” meeting included former U.S. State Department officials, including Joel Wit, a senior fellow at the U.S.-Korea Institute at Johns Hopkins University and founder of its website monitoring Pyongyang, 38 North, and Robert Einhorn, a senior fellow at the Brookings Institution think tank.

The JoongAng Ilbo sat for an interview on Nov. 15 with Wit in Seoul before he headed to Geneva.

Wit said the current strategy on North Korea has failed and said pointed out that the “alternative is to try to reach out to North Korea and see if there is any path forward in terms of diplomacy,” to try to put a moratorium on their nuclear program and then go from there.

He warned against drastic measures, such as Washington conducting a preemptive strike on Pyongyang or South Korea seeking its own nuclear armaments.

“Sanctions, diplomacy, military steps, it’s all inter-related,” he added. “If diplomacy takes hold, that allows you not make to make that kind of drastic decision, at least not right away.”

He said, “We’re not connecting all these different dots, and that’s the problem.”

Wit, who said he has visited North Korea more than a dozen times, was responsible for U.S. policy on a range of issues related to nuclear arms control and weapons proliferation in the State Department’s Office of Strategic Nuclear Policy from 1988 to 1992, and served as coordinator for the U.S.-North Korea Agreed Framework from 1995 to 1999.

Q. What can we expect from the future of the South Korea-U.S. alliance in a Trump presidency?

A. Part of the problem here, even for Americans, and I understand, of course, for South Koreans, is that it’s unclear exactly what a new U.S. administration’s policy would be both toward South Korea and North Korea. So many of us are trying to figure that out also at this point, and I don’t think any of us really knows.

Secondly, it’s unclear whether that’s what he has in mind. Given what he said during the campaign, it’s still very unclear what he might have in mind, if anything.

Third, I think that on the issues he seems to care most about, which is the economic aspects of alliances, I think what he’ll find is that with the alliances in Asia, our allies do pay quite a substantial share of the cost of the alliance. And that may be different in Europe. It’s different because I think the European allies do contribute less in terms of the cost of alliances.

What kind of policies would you advise for the new administration to take on North Korea?

There is a basic problem in terms of the overall view in the United States about how to deal with North Korea. Right now, if you talk to most people in Washington, what they’ll say is first of all, the Obama administration’s policy on North Korea has not worked; there’s a consensus on that and maybe here, too.

Secondly, there all different sorts of ideas on what to replace that policy with, but one of the big ideas is that we should enact crippling sanctions on North Korea to force them to come to the negotiating table and reach agreements that we like. And not only crippling sanctions on North Korea, but we should be very willing to move forward with secondary sanctions that will effect Chinese business and financial intuitions.

And the theory is that China will allow crippling sanctions, maybe through the United Nations, and if they don’t allow it, that we would punish them. And as a result of all of that, the Chinese would do what we want them to do. They will essentially ignore their own national interest in order to support us. And I think that’s just a dead-end. And as a result of that, there’s going to be more tension in the U.S.-China relationship.

The Chinese could easily retaliate through various means. The end product of all of this will be that North Korea will be essentially unaffected and will use the divide between the United States and China, just as it has used it all along. The current consensus is wrong. It’s not going to work — it’s going to fail.

So, what is the alternative?

Well the alternative is to try to reach out to North Korea and see if there is any path forward in terms of diplomacy, in terms of trying to stop their program, and then trying to move forward to reverse it and eventually achieve a nuclear free Korean Peninsula. I think that there is a chance it would work, at least initially.

So that’s basically the choice. A chance that something will work, versus something that is guaranteed to fail. It’s not a good choice, but a lot of foreign policy issues, particularly in the United States, do not have good choices. It’s the least worst option.

Do you think a preemptive strike on North Korea can solve the nuclear issue?

More magical thinking. I’ve been through this before because in the Clinton administration, we were prepared to launch a preemptive attack, and we probably would have done it but it was a very different situation back then. We knew North Korea didn’t have any nuclear weapons, didn’t have any fissile material to build nuclear weapons, was about to move the fuel rods from a reactor to a place where they could produce material to form a bomb and we would have tried to stop them.

Today, we have a very different situation. They have nuclear weapons, they have a stockpile. If North Korea is about to test an ICBM, an intercontinental ballistic missile, people want to destroy it before it’s tested. If North Koreans have a big missile on a launch pad, and they’re about to test it, we probably could destroy it. And then the assumption is that North Korea will do nothing. But they will retaliate. So the point is it creates a very dangerous situation. It could escalate to involve not just South Korea and Japan, but China and United States.

There is analysis that North Korea will possess 20-100 nuclear weapons by 2020.

How many nuclear bombs are there at this point?

We don’t know exactly, but I’m willing to say around 20 or more.

Why does North Korea want to have so many nuclear weapons?

The first thing is, when countries build nuclear weapons, they want to have enough that they are confident that they can retaliate if someone else tries to destroy them. That’s called assured retaliation.

They have to be confident that they can retaliate because that way it reinforces their security against an enemy that may want to attack them. In order to have assured retaliation, you need more than three or four weapons, and you need to have them with delivery systems that can survive a preemptive strike. They’ve reached that point.

Secondly, if they keep building more and more, they may envision other uses for their nuclear weapons. They may, for example, like Pakistan, which faces an India with many more conventional forces, they may threaten to use those weapons early in a conflict as a means of deterring India, but they may actually do it if there is a war.

Does South Korea need its own nuclear armament?

I can totally understand why people think that, but there are a lot of downsides. If South Korea decided tomorrow to withdraw from the NPT, the Nuclear Nonproliferation Treaty, to build nuclear weapons, there would be enormous economic and political consequences for South Korea.

That would be, to me, the last resort that South Korea should take. That would be the last step, if it became clear the United States was gradually pulling back from the Pacific and from the peninsula, and North Korea continued its programs and was unrestrained and maybe more threatening. There are steps short of that, which South Korea should be taking now.

You have said it is necessary to reduce or stop the regular military exercise between Seoul and Washington to start kind of negotiations with North Korea.

It may be necessary. It’s one of the things they may ask for… I would argue that it’s worth trying because, first of all, it doesn’t really adversely affect our security. Secondly, it will stop some programs we want to try to stop. Third, it will give us a chance to see whether there are more diplomatic solutions.

They’re not going to collapse. People have been predicting a collapse since the late 1980s and it hasn’t happened. I think a lot of analyses of North Korea these days are slanted and ideologically motivated, so when you have executions, people shuffling through different positions, defections, I don’t think any of that is abnormal.

I have a friend who visited Pyongyang a week or two ago. He said it’s unbelievable, the amount of activity in Pyongyang, and a lot of it is commercially related. Sanctions aren’t working. China isn’t enforcing sanctions and, you know, the North has 50 years of experience in evading sanctions.