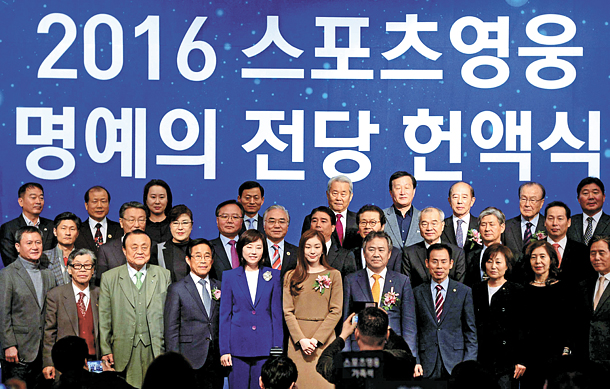 Kim Yuna, sixth from the left in the front row, and Cho Yoon-sun, minister of culture, sports and tourism, left of Kim, during a photo session at the Korean sports Hall of Fame induction ceremony on Wednesday in Seoul. Kim, the ninth person to be inducted, became the youngest to receive the honor. [NEWSIS]

The former figure skater Kim Yuna was inducted into the Korean sports Hall of Fame on Wednesday, becoming the youngest to receive the honor.

The induction ceremony took place in Songpa District, southeastern Seoul. At the age of 26, Kim is the youngest and the first winter sports athlete to become a Korean sports Hall of Famer. The Korean Olympic Committee (KOC) began honoring notable sports figures who helped promote Korea globally through sporting affairs and competitions in 2011. Before Kim, inductees included the late marathon runner Sohn Kee-chung, who claimed gold at the Berlin Olympics in 1936 when Korea was still a part of the Japanese empire, and late weightlifter Kim Seong-jip, who claimed bronze during the 1948 London Olympics, the first Olympic medal Korea earned after becoming free of Japanese rule. Both were inducted in 2011. Kim is now the ninth person to be inducted. She is also a recipient of the Cheongnyong Medal, the highest Order of Sports Merit in Korea, which was awarded last month.

The KOC announced last month that Kim, who won gold from the 2010 Vancouver Games and silver in the subsequent Olympics in Sochi, has been selected. She became the first Korean to reel home a medal from an official international figure skating competition when she won gold at a ISU Junior Grand Prix in 2004. Two years later, Kim again made history by becoming the first skater from Korea to stand atop of the podium in a senior Grand Prix Final. Her Olympic medals were the only accolades Korea acquired during the Winter Games from events other than short track speed skating and speed skating. Korea has, so far, won one gold and one silver in figure skating, both of which belong to Kim. Kim currently works as an honorary ambassador for the 2018 PyeongChang Winter Olympics, which will take place in Pyeongchang County, Gangwon.

“All the inductees before me are veterans in the sports community and I feel I am too young to receive this honor,” Kim said. “I consider this as an encouragement for me to live a meaningful life. I will do my best to contribute to the development of Korean sports and help the PyeongChang Olympics to be successful.”

Kim is said to have been victimized by a corruption scandal involving President Park Geun-hye and her confidante, Choi Soon-sil, which has infuriated the entire nation. Kim reportedly upset one of Choi’s associates after refusing to participate in a national group exercise routine, known as “Neulpum Calisthenics,” which was directed by Choi’s friend, Cha Eun-taek, and attended by President Park. Some reported that Kim was therefore denied the Hall of Fame honor last year. Despite earning over 80 percent of the votes by fans in 2015, Kim was excluded from the final list because of a regulation stipulating that only those 50 years old or older may be inducted, an explanation provided by the KOC. The KOC reportedly abolished the rule this year.

“I didn’t even know about ‘Neulpum Calisthenics’ until it was reported by the media,” Kim said. “I didn’t feel any backlash for not participating in it. But I am quite concerned about the snowballing scandal.”

As for rumors that Kim deliberately refused to shake hands with the president last year at a national event, Kim denied, explaining, “I wasn’t standing where I was supposed to be and I was a little confused. Even if I were that ill-mannered, refusing to shake hands with the president is unthinkable. I know the scene could have created some misunderstanding but I didn’t refuse to shake her hands intentionally.”

Asked about other athletes at the center of the scandal, she said, “I am not in a position to say anything. But it worries me and others that the situation is being blown out of proportion.”