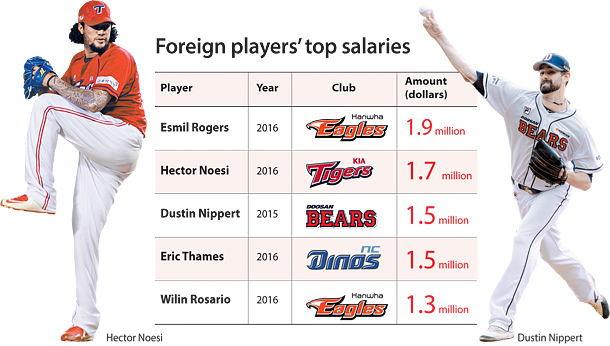 Will there be a $2 million man in the Korea Baseball Organization?

Since the league abolished the $300,000 cap in the annual salary paid to foreign players, whose contract and its terms and conditions are newly signed each year, the prices teams are willing to pay to add some fire to their pitching and batting lineups have skyrocketed. After Eric Thames signed a $1 million deal with the NC Dinos in 2014, the Doosan Bears’ Dustin Nippert signed a $1.5 million deal. Then came Esmil Rogers this year, a former New York Yankee who signed a $1.9 million deal with the Hanwha Eagles. If things continue this way, next year may well be the year the KBO welcomes a $2 million man, with KIA Tigers’ pitcher Hector Noesi and this year’s league MVP Nippert at the vanguard of the salary race.

Noesi, a Dominican pitcher who tossed for several different Major League teams such as the Yankees, the Seattle Mariners and the Chicago White Sox, has all the numbers needed to become the first one to sign such a deal. He donned the Tigers uniform after banking $1.7 million, and as the starting pitcher for the Tigers, he went to the mound in 31 games and recorded 15 wins and five losses, keeping his earned run average at 3.40 throughout the season. The 206 and 2/3 innings he tossed in is the most number of innings pitched by a single pitcher this season, another indicator that his shoulder may be worth the money. While the fifth-seeded Tigers were knocked out of the playoffs by the fourth-seeded LG Twins this fall, Noesi still managed to lead the Tigers by clinching a win from the first match of the Wild Card series.

Indeed, the Tigers, or whoever wants the pitcher in their lineup, will have to write a big check. After Rogers was released from the Eagles, Noesi became the most expensive foreign player in the KBO. He might continue that streak as the Tigers are expected to up his paycheck. After all, with the season he’s had, he holds all the cards. “There were some controversies regarding his paycheck,” said a Tigers official, “but he silenced all the critics with his performance. We will see how the negotiation goes.”

Nippert of the Bears may pocket a $2 million deal as well. The KBO MVP has carded 22 wins total by himself, about 20 percent of the 93 wins that the Bears captured this year. After leading his team to sweep both the pennant and the KBO trophy, he claimed a triple-crown in pitching, packing home the KBO ERA title, wins title and WPCT title. After a poor season in 2015, during which he failed to live up to the $1.5 million paycheck, playing in a meager 20 games while winning six and losing five, his salary plummeted to $1.2 million this year. But after the best stint of his career in the KBO, his salary may be boosted by more than the $300,000 cut he suffered then.

For clubs in the KBO, signing foreigners is a safer bet than signing a free agent (FA). While foreign players are pricey, teams can replace them in the mid-season if they fail to meet expectations. By comparison, when signing an FA, the minimum signing period is four years. In case of the Eagles, for example, they have dropped nearly 40 billion won ($34 million) in the past few years for FAs. Regardless, they finished near the bottom in the past five seasons, failing to make it into the postseason for the ninth consecutive year.

“From the clubs’s standpoint, it’s less risky to invest in foreign players,” said an official from a KBO club. “For Noesi and Nippert, clubs would be willing to pay over $2 million.”