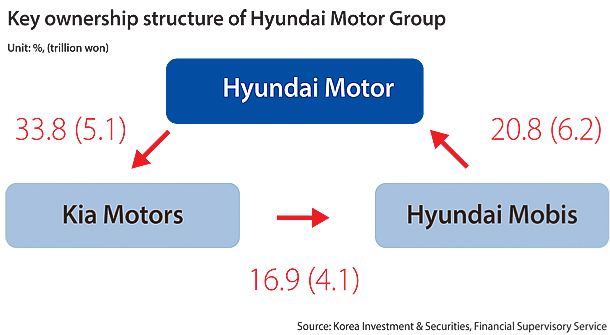 Samsung Electronics’ announcement that it would review the option of splitting into two holding and operating companies will likely be an impetus for other family-run conglomerates to follow suit, especially as the country’s legislature debates passage of stricter ownership rules, analysts say.

Like Samsung, the country’s major conglomerates, including Hyundai Motor Group and SK Group, have their parent companies and affiliates interconnected through complex cross-shareholding arrangements, a factor that could put them under more scrutiny once a bill aimed at limiting the power of owner families passes the National Assembly.

“When discussion of the bill makes progress, there will be growing calls for passage of the proposal,” said Yoon Tae-ho, an analyst at Korea Investment & Securities. “Now that Samsung cannot be used as a shield, the pressure will solely be placed on Hyundai Motor.”

Members of the opposition party say the scheme leads to poor corporate governance and inefficient cash management, while the ruling party sees the proposal as an impediment to autonomous management.

The chances of the bill passing are getting higher, as opposition voices in the legislature are gaining clout due to the political scandal involving President Park Geun-hye and her confidante Choi Soon-sil. “After the controversial scandal, the standing of the ruling Saenuri Party will be weakened, and they will be bound to accept much of the opposition party’s demands,” Yoon said.

The analyst predicted that Hyundai’s ownership restructuring will be directed at bolstering the position of Chung Eui-sun, the son of Hyundai Motor Group Chairman Chung Mong-koo, in a gradual leadership transfer.

The split could also cut the cross-shareholding link between Kia Motors and Hyundai Mobis as the government moves to beef up regulations on cross ownership among affiliates.

Another potential scenario is a stock swap between the heir’s holdings in logistics affiliate Hyundai Glovis and Kia Motors’ shares in Hyundai Mobis to eliminate cross-shareholding and strengthen control of the group’s heir. The Hyundai scion has a 23.3 percent stake in Hyundai Glovis.

Another conglomerate, SK Group, has raised the possibility of establishing a new sub-holding unit following a major restructuring last year that combined its holding company with its IT services provider SK C&C in an effort to simplify the group’s ownership structure.

Analysts believe that SK Telecom, the country’s top mobile carrier, will likely split into two entities that have separate roles.

“Right now, SK Telecom is a major telecommunications company that is largely influenced by government regulation,” said Lee Sang-hyun, an analyst at Hi Investment & Securities. “But once it is divided into holding and operating companies, the holding company can be more free from regulation in deciding investment and mergers and acquisitions.”