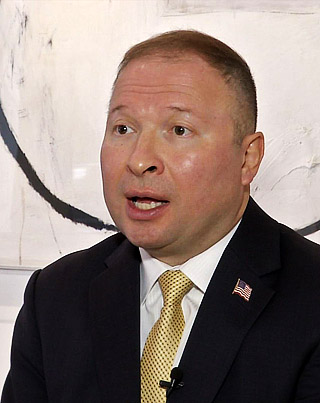 Jeffrey D. Gordon, former Pentagon spokesman who served as a national security and foreign policy adviser for the Donald J. Trump campaign, said that South Korea is already paying a fair share of the cost of maintaining U.S. troops here.

“Mr. Trump just wants to make sure that South Korea and Japan are paying their fair share,” said Gordon as he spoke on the U.S. president-elect’s view on defense burden-sharing as he sat for an exclusive interview with the JoongAng Ilbo and JTBC in Washington on Nov. 22.

According to the Stockholm International Peace Research Institute (SIPRI), South Korea’s military expenditure compared to its GDP is 2.6 percent, compared to 1 percent for Japan.

“I can guarantee you that he is aware, and he’s been briefed about how much our allies and South Korea and Japan spend,” Gordon continued, adding that President-elect Trump “is aware that South Korea has done a good job in what they have spent.”

He said, “The focus for Asia would clearly be Japan spending more.”

The retired Navy commander, reported to be a part of Trump’s transition team, served as Pentagon spokesman during the George W. Bush administration, under defense secretaries Donald Rumsfeld and Robert Gates.

“We want to make sure that South Korea and the United States are working very closely together, in our alliance because it’s one of the most important allies we have,” Gordon also emphasized. “And so we have to stand together with South Korea and Japan. They will not be isolated in any way.”

Ahead of the interview, Gordon held a closed-door meeting with some dozen European ambassadors at a hotel in Washington explaining the policies of the incoming U.S. administration.

Q. How would you describe President-elect Trump’s style?

A. I was the director of national security [in the Trump campaign], so I briefed Mr. Trump on national security and foreign policy. And I would say that he’s a very brilliant man; he’s been a very successful businessman, a billionaire. He’s been very involved in real estate and hotels, casinos, so he understands businesses, he understands tough negotiation. So I think that he has a lot of common sense when it comes to what it takes to grow business, keep a business, and also I think he’s like a regular American. He’s not an elitist. I think a lot of people will see that the establishment in Washington is full of elites and people who are living in a bubble. Mr. Trump is not that way.


So, are you describing him as a politician of common sense?

Trump, I think, has a realistic view; he understands that the U.S. is not as powerful as it once was, as far as our economy. We still have the world’s most powerful military, but how long can that last, 20 trillion in debt? It can’t.

So that’s why we want our allies to do more, and I’ve been to Korea many times. It is beautiful. Japan is beautiful, too. One analogy Mr. Trump likes to use is airports. He travels through Asia and Europe and he sees airports are so wonderful. Well, they’re often much better than the United States’ because these countries that we help pay for their security have more money for things like infrastructure.

So Mr. Trump is looking at a major infrastructure project, but at the same time it’s going to be hard to sustain military presence if our allies don’t pay more of their fair share. Now there have been some people who said Mr. Trump wants South Korea, Japan to have nuclear weapons. That’s entirely false. It’s not true. All he wants is a better deal with our allies to make sure they pay more for mutual security.


Is Korea a target of negotiations for shouldering higher costs of maintaining U.S. troops?

Well, I would say that the U.S. pays 3.5 percent of GDP for defense, and we have a 17 trillion dollar economy. Korea pays 2.8 percent of their GDP for defense and Japan pays 1.4 percent. Now if you look at the standard for NATO, our European allies and Canada, what they spend on defense is supposed to be 2 percent of GDP. Korea has already met that threshold by a lot. So I don’t think the focus is on Korea for spending so much more. The focus for Asia would clearly be Japan spending more. I do think he wants South Korea to be a partner that shares equally with us, so it’s a matter of dollars and cents, but I wouldn’t say that they would see the most pressure. I think it would be Japan that sees more pressure than Korea.


What do you think about the deployment of the Terminal High Altitude Area Defense (Thaad) system in Korea?

It’s very important to have missile defense capability because we know that North Korea has nuclear weapons capability, and they’re perfecting their missile capability, too. And should they be able to successfully put their nuclear warhead on top of the missile, that’s going to be a threat for the entire world because they can strike their neighbors, and they can strike the U.S., potentially including Hawaii and Alaska, and even an EMP (electromagnetic pulse) device, for instance, over the West Coast of the United States or over the central U.S., could kill millions of people.

Because of the way the electromagnetic pulse hits the electrical grid… if you have no power for an extended period of time, it’ll be disastrous for the U.S. So it’s very important to have the missile defense capability there in South Korea, in Japan, and for our naval ships that are deployed in two places like Japan. It’s very important to be able to contain North Korea; they spend all this money, but they have to know that at the end of the day they’re not going to be able to strike us anyway, so they’re wasting the money. I think that’s an important message, and it’s a fact we need to send to Pyongyang.


What is the policy direction of the next U.S. administration?

North Korea has had a terrible track record as a serial proliferator of weapons, both missile technology and nuclear technology to Iran. So, we want to work more closely with China to pressure North Korea to stop their exportation of weapons. And we also want to make sure that China understands that we’re very serious about them not pushing their neighbors around for the Spratly Islands and for the Paracel Islands. We want to make sure China understands that Korea and Japan are our allies, and we want to have a solid, unified approach, so China does not make excessive maritime and airspace claims that they have been doing.


What do you believe is the solution to the North Korean nuclear issues?

Well, China is the main linchpin. We have to pressure China to pressure North Korea to stop their nuclear program. It’s a bit hard. It hasn’t worked since the 1990s under President [Bill] Clinton, President [George W.] Bush, President [Barack] Obama; nothing’s worked… If the North Koreans really knew what life was like in South Korea, I think the regime would fall much quicker. But until that happens, we just have to do what we can in South Korea to bridge ties peacefully as we can little by little, and then have China just gradually pressure the regime.


What is your take on North Korean leader Kim Jong-un?

I think that Kim Jong-un can probably be reasoned with. He went to school in Switzerland. I know Swiss people who know him. So I think he can be reasoned with. He’s a very big fan of basketball diplomacy; Dennis Rodman went to visit. I don’t think those things should be discounted. I think they’re important. I think if Kim Jong-un thought that he could survive, he might make reforms, but I think he’s so afraid that if he makes any reforms, the whole wall’s going to come down. And he would rather be the dictator, the emperor, than have the whole thing fall apart. And he’s so afraid and paranoid that he’s killed family members, as we know, he’s killed generals.

But I think there is room to work with him for eventual changes... I don’t think it’s going to come to a war, it’ll be disastrous for the whole peninsula, for the world. So I think we can avoid that.