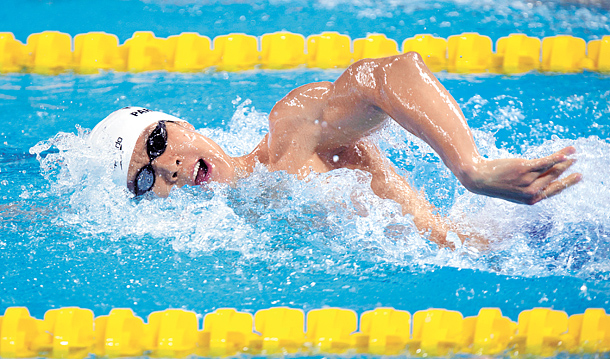 The Korean star athlete won the men’s 400-meter freestyle at the FINA World Short Course Swimming Championships on Tuesday in Windsor, Canada, with a time of 3 minutes and 34.59 seconds.

It was the very first time for a Korean swimmer to win gold at the FINA World Short Course Swimming Championship.

This is Park’s first appearance at the 25m world championships since April 2006 in Shanghai, and the first at any short-course competition since November 2007. At the 2006 short-course worlds, Park won silver in the 400m and 1,500m freestyle.

The short-course worlds take place in 25 meter (82 foot) pools, half the length of an Olympic-sized pool. World-class top swimmers usually do not participate in the competition as short-course swimming was not adopted by the Olympics.

Records are usually better in the short-course than in Olympic pools.

Park’s time on Tuesday is the fastest 400m freestyle time at a short-course this year, and is also Park’s personal best by more than two seconds.

Park, a former Olympic gold medalist, is also scheduled to compete in the 100m, 200m and 1,500m freestyle races in Windsor. This is Park’s final competition of the year.

This has been a tumultuous year for the 27 year old. After his 18-month doping ban ended in March, he took the Korean Olympic Committee (KOC) to an international court for the right to compete at the Rio de Janeiro Summer Olympics in August.

Park then regrouped and won two races at the National Sports Festival in October. Then at the Asian Swimming Championships in Tokyo last month, Park picked up four gold medals.

After the Asian event, Park claimed former vice sports minister Kim Chong had blackmailed him into giving up on his Rio Olympic dreams in May. Kim is a key government figure implicated in the influence-peddling scandal surrounding President Park Geun-hye and her longtime friend, Choi Soon-sil.

Local media alleged Park’s gold medals after Rio were vindications that Park had the potential to win a medal in the 2016 Rio Olympics if he had not been pressured by then vice sports minister, Kim Chong.