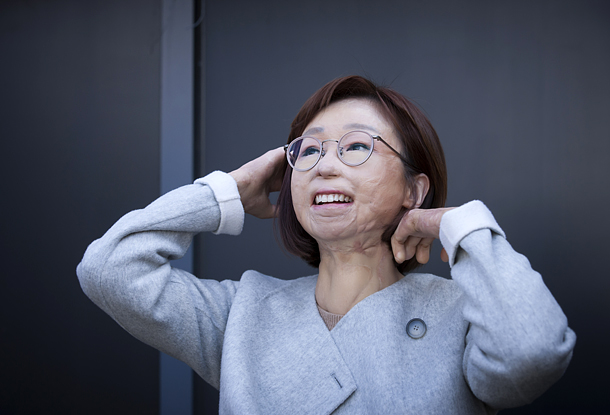 During an interview with the JoongAng Ilbo, Lee Ji-sun said she wants to change Korean society’s misconceptions about disabled people and that they should not be subjects of sympathy or dispensation. [KWON HYUK-JAE]

In July 2000, Lee Ji-sun, now 38, was caught in a devastating seven-car pileup on a Han River bridge, leaving her with a life-threatening third-degree burn over 55 percent of her body. She was a senior at Ewha Womans University at the time.

In 2003, Lee wrote her first book, “I Love You, Ji-sun,” and followed up with another book in 2005, “I’m Happy Today, Too.” She obtained a doctorate in social welfare at the University of California, Los Angeles in June, 12 years after she left Korea, and she returned in September in preparation for the new semester next year in which she will be teaching at a university.

“We bump into people all the time when we walk down the street,” she says. “I think of the accident just the same way. We are all special people. I want to change Korean society’s misconceptions about disabled people; they are not subjects of sympathy or dispensation.”

The following is an edited except of JoongAng Ilbo’s interview with Lee.

Q. Inside Lee’s bag was a copy of “Stumbling on Happiness” by Daniel Gilbert, a psychologist. Is that a book you’re reading?

A. I get questioned a lot on the idea of happiness. I answer that happiness, as well as hope, is a vague expectation. I don’t want to go back to before when I had the accident, because I believe there waits an unexpected treasure for me after all the suffering and endurance. It was really hard to define happiness. This book helped me think about what it really is.

How did it help do that?

People typically think it’s better to separate conjoined twins, but in the book, there are these twins who actually feel happier living life as they have been born. It’s dangerous to look at different people’s lives from my own frame. The book also quotes Shakespeare, who wrote, ‘But, oh, it makes me bitter to look at happiness through another man’s eyes.’

It sounds like the story of your life, doesn’t it?

Some people may look at me and think, ‘I am better than her,’ ‘I should cheer her up,’ because people often take comfort in the misfortunes of others. That’s fine. But that leads to sadness once you find someone better off. Nothing is worse than comparing yourself to others.

You said you feel like you’re standing in a vast plain. Why?

I was a little worried after graduation because I had finished my doctoral dissertation without any specific goals in mind. I’m waiting for a call from a university, but I’m worried because I’ve never had a set job. I have no experience, and I’m nervous.

What is your dissertation on?

We heard that you called yourself the LA crumple?

In the first year of my doctorate course, I was the definite tail-ender and my English was so bad. I cried a lot, too. No one said it out loud, but it was obvious that I was making the least amount of progress among my seven colleagues. But I didn’t graduate last. I had no child or husband to distract me. (Laughs)

Your master’s degree was on rehabilitation counselling?

After I was categorized as third-grade disabled, I swore to myself that I would dedicate my life to people with disabilities. I was able to get back on my feet thanks to my family and everyone around me. I received a master’s degree in rehabilitation counselling at Boston University in 2008. The United States’ infrastructure is very solid, but it’s a different story here in Korea. Changing individuals is meaningful, but I wanted to look at the bigger picture. I finished another master’s course in social welfare at Columbia University.

What would you do if you were to become the minister of health and welfare?

My first priority would be to make it mandatory for all elementary, middle and high schools to have lessons aimed at eliminating prejudice toward handicapped people. I think the media should feature disabled people a lot more. People have gotten used to me through TV programs. I went on all the TV shows and interviews hoping that people who look similar to me would feel comforted. Because once you take away the curiosity, people don’t look at you twice. I hope for a world in which we can all run side-by-side like marathon running mates.

You have given numerous lectures, right?

More than 1,000, I think. I worked nonstop when I was abroad. My schedule is full [to give lectures] until the end of this year. Churches, companies, schools, wherever I am called, I go. I should cut down once I get a job next year, though.

Can you talk about the accident?

Yes, now that I’ve sucked it all up. I’ve started giving talks since 2003. It was hard at first, I must admit. I made jokes because people were taking my story too seriously. But one day, I realized I sounded like a tape recorder and disliked myself for that. That was when I came across Zacchaeus from the Bible.

Zacchaeus was a tax collector who climbed up a mulberry tree to look at Jesus because he was too short to see him among the crowd. Seeing him, Jesus told him to come down and visited his house. Later, Zacchaeus donated half his assets to the poor. A friend of mine told me that when I am in trouble, I should think of Zacchaeus. The friend told me that, even though it’s not written in the Bible, Zacchaeus would have talked about the moment he met with Jesus all the time. From then on, my life started taking on a different color. I swore to myself that I would live my life as if I had become Zacchaeus.

Do you have to undergo more skin graft operations?

I’ve had 40 operations. Skin grafting is like planting a tree to a different soil -- if it gets good sunlight and nutrition, it settles down well with a pinky taint. But if the situation doesn’t allow it to do so, then it rots and turns black. It was quite painful to wait for the process, but fortunately, I think the time has come for the waiting to stop.

It was to gather funds for the Purme foundation, which I work with as the honorary ambassador. I ran two marathons, in 2009 and 2010. It took me 7 hours, 22 minutes and 26 seconds for the first one in New York, and I shortened it to 6 hours and 45 minutes in the second one, which was held in Seoul. I thought maybe I could do another, since three is a lucky number, but I don’t think I have the energy now.

You mentioned that Yoo Jae-suk is your ideal type of man?

I watched Korean TV shows in the United States to tame my loneliness. I actually think Lee Young-pyo, the soccer player, is a great man. He’s just a year older than me, but he’s lived his life to the fullest, trying his very best all the time. But I think, as a spouse, I prefer someone I can have a casual and funny conversation with. Wouldn’t it be a little burdensome for me if my husband tried too hard? (Laughs) I had been waiting for the love of my life to appear, but I’ve even let go of that now. If I meet him, then that’s splendid, but if I don’t, that’s good in itself.