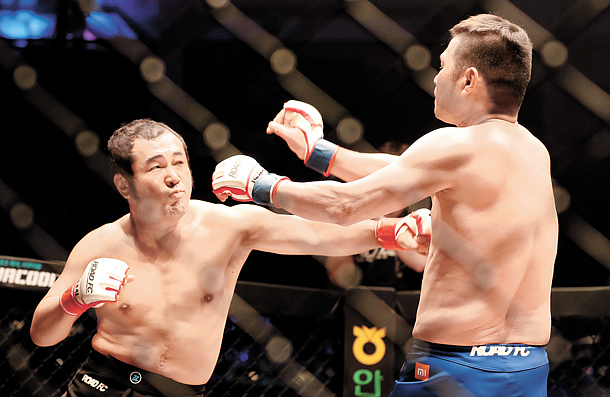 After suffering an injury to his right eye, actor Kim Bo-sung, 50, was defeated by Japan’s Tetsuo Kondo, 48, in a welterweight (77 kilogram, or 170 pounds) mixed martial arts match for Road FC at the Jangchung Gymnasium in Seoul on Saturday.

Kim came out nimbly, matching the background music from “Rocky.” “Even if I lose like the protagonist Rocky Balboa, I want to make an impression,” Kim said, with his right fist raised in the air and a smile on his face. He even had the time to give a bow deeply from the ring to the fans.

Contrary to predictions for Kondo’s one-sided superiority, the beginning of the match was intense. Kim daringly swung his fists at the sound of the bell. Calculating that he would have no chance if he had an infight with the judoka Kondo, Kim kept his distance and had a slugfest. Nevertheless, with four years’ experience in 17 official matches, Kondo was a veteran. Kondo brought Kim down 30 seconds into the start of the match. After cornering Kim with his fists, Kondo attempted an arm-snapping armbar to coerce a submission from Kim. However, Kim freed himself and hit the mark with his left hook. Shouts poured down from the auditorium. “I couldn’t give up. I thought I had to definitely free myself from the armbar,” Kim said.

But then, the contest was decided in a fleeting moment. A punch by Kondo struck Kim’s right eye. It was not dead center, however, and Kim signaled that he could not see. The referee stopped the fight 2 minutes and 35 seconds into the first round.

Kim’s inability to see out of his right eye was a disadvantage. In his youth, he suffered an eye injury, and is barely able to see through his left one. Kim said in a previous interview, “I even went so far as to go on my knees and beg for my wife’s permission…I promised to be sure to guard my right eye.” He had no choice but to give up when his right eye was hit.

After defeat, Kim plopped down with a mournful expression and didn’t leave the ring for some time. Celebrity colleagues such as Ahn Jae-wook, Shim Hyung-tak, singer Muzie and comedian Yoon Hyung-bin consoled him. Kim apologized profusely. “With my right eye getting hit, I couldn’t see in front of me. I even felt the dread of becoming [completely] blind as a result from this,” Kim confessed. “I came to the realization that I can’t have a martial arts match while being unable to see on my left.”

Kim and Road FC planned to donate the prize money and profit from the match to childhood cancer groups. Before the event, he donated hair after cutting it short. “I wanted to do my best for these child cancer patients,” Kim said. “I wanted to give some hope to the children and their parents. I’m deeply sorry.”

The fans stood up from their seats and chanted “loyalty” and “Kim Bo-sung.” Kim clenched his fists and roared back “loyalty.”