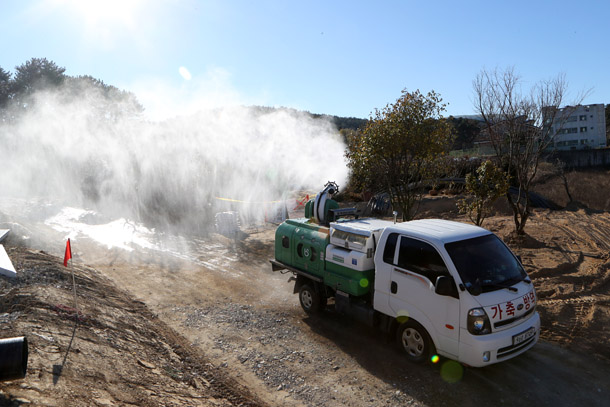 A fumigation truck does rounds in Gijang County in Busan on Friday after a report of an outbreak of avian influenza, or AI. The government raised the AI crisis level to the highest level in its four-tier system. [SONG BONG-GEUN]

A highly pathogenic strain of avian influenza has now infected Naju in South Jeolla, home to Korea’s largest population of ducks, and in the past few days spiked in 14 areas in Jeongeup in North Jeolla.

After a duck farm in Jongo-ri of Naju, South Jeolla, was determined to have been infected with the H5N6 avian influenza, the virus was found within a week on another duck farm just 1 kilometer (0.6 mile) away, according to the Naju city government on Friday.

Naju is home to 1.51 million ducks, the largest number in Korea.

Health authorities have culled 17,400 ducks at the Jongo-ri farm, and are planning to cull another 228,000 ducks being raised within a 3-kilometer area around the farm.

The provincial government of South Jeolla is denying transmission from the first farm to the second.

“The two farms share a mountain between them,” said a spokesman of the provincial government, “and there has been no movement of eggs or baby ducks between them.”

Within South Jeolla, avian influenza was detected in three areas in Naju, one in Haenam County, one in Muan County and another in Jangseong County. A total of 209,000 ducks and chickens have been culled in South Jeolla.

At Jeongeup in North Jeolla, the disease was found 14 times in 12 days, spreading at an alarming speed.

“Health authorities culled 8,000 chickens at a farm in Jeongeup on Thursday, after a strain of the H5N6 avian influenza virus was detected,” said the North Jeolla provincial government in a statement.

The farm is only 1.3 kilometers from another in the city where the disease was found 12 days ago.

“Health authorities are conducting epidemiological surveys on the outbreaks,” said an official of the livestock department of the North Jeolla provincial government.

There have been 14 confirmed outbreaks in North Jeolla; 10 in Jeongeup, one in Gimje, one in Gochang County and two in Booan County. Health authorities are still testing the virus strains found in five more areas in North Jeolla, four of which are in Jeongeup. As of Friday, a total of 517,000 chickens and ducks at 36 farms in the province have been culled.

“The ministry decided to raise the national aviation influenza crisis level to the highest level in its four-tier system,” said Kim Jae-soo, minister of agriculture, food and rural affairs, in a press briefing Friday. “The H5N6 avian influenza is spreading more rapidly than the H5N8 avian influenza in 2014.”

The Korea Centers for Disease Control and Protection said it will continue to vaccinate 6,779 farmers and health authorities doing sterilizing and culling jobs, who are the people at the highest risk of getting infected. The ministry said the virus can spread via feces of infected chickens and ducks to people, but that the possibility is low and that no person in Korea has been found infected with the H5N6 avian influenza.

The H5N6 avian influenza virus appeared in Korea one month ago and has caused the largest amount of damage the domestic poultry industry has ever experienced from bird flu. More than 284 farms have been hit and some 16 million ducks, chickens and quails culled.