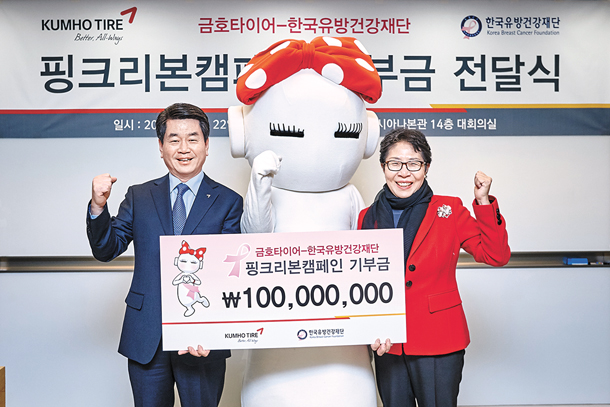 Kumho Tire, along with the Korea Breast Cancer Foundation (KBCF), presented the funds collected for the Pink Ribbon Campaign at a delivery ceremony held on Dec. 22 at the Kumho Asiana headquarters.

The Pink Ribbon Campaign is a globally-held event to raise awareness of breast cancer and ways to prevent the disease. Kumho Tire has held a campaign for 5 consecutive years since it agreed to sponsor KBCF in 2012.

During the ceremony, Kumho Tire delivered 100 million won worth of donations collected from the company and its staff members, as well as Kumho Tire customers from all across the country. The funds will be used to support the medical expenses of low-income breast cancer patients.

Lee Han-seob, the President of Kumho Tire said, “Kumho Tire pays attention to women’s health and consistently holds the Pink Ribbon Campaigns to raise awareness. We will further practice corporate responsibility through contributions in other fields such as social welfare and education.”

This year, 650 executives and staff members of Kumho Tire participated in the “Pink Ribbon Marathon” held in Gwangju Seo-gu in June, and Seoul Yeouido in July.

Also, the company has been involved with the “Pink Fitters Day,” a breast cancer campaign held in Australia, for the past 7 years.