At 1,000 games, Joo still plays every one like it’s his last

At 1,000 games, Joo still plays every one like it’s his last 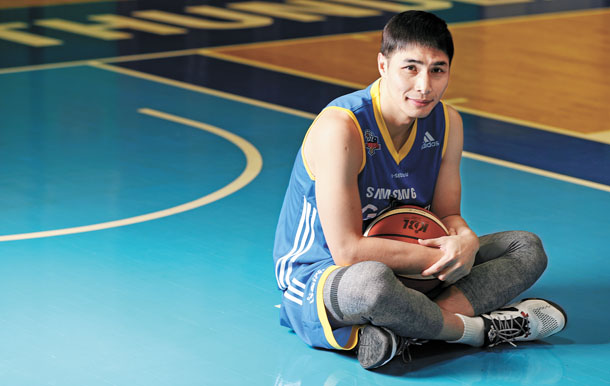 Joo Hee-jung sits at the court, awaiting his 1,000th game in his 20-year career as a basketball player for the first time in the history of Korean basketball. Joo overcame four major injuries and still dominates the court in his late 30s. “I want to make the most with the time I’ve been given in the court, whether that’s one minute or one second,” said Joo, who plays as the sixth man this season. [KIM MIN-GYU]

This year marks the 20th anniversary of Joo Hee-jung’s career as a basketball player, having debuted back in 1997. The legendary point guard for the Seoul Samsung Thunders awaits his 1,000th game in the pro league, becoming the first-ever Korean basketball player to hold the record. Wednesday’s match with the Goyang Orion Orions was his 999th, and last Friday’s with Anyang KGC fulfilled Joo’s monumental work in the court.

In his 20 years as an athlete, the 39 year-old only missed 12 games altogether. The gap between his record and the second most number of games played is enormous; 738 games by Choo Seung-kyun, currently coaching the Jeonju KCC Egis. Experts expect Joo to hold onto the record for quite some time.

“I’ve been competing with young players in their 20s in the court, and now I’ve gotten this far,” he said. “When I was in my fresh years, the most popular celebrity was H.O.T. [a first-generation K-pop boy group popular in the 1990s].”

Those who made their debut with Joo have long retired as players. Cho Dong-hyun is coaching the Busan KT Sonicboom and Lee Kyu-sup is doing the same for Joo’s team. “I asked myself in the mirror today,” he said, “would I have been able to compete in 1,000 matches if I was born a basketball player again?”

Joo holds a few other records as well, such as the most number of steals, rebounds, assists and triple doubles. Nevertheless, Joo takes the most pride in the 1,000 games he has played since, he says, “it is a record achieved by my will, not my talent.”

As a child, Joo was raised single-handedly by his grandmother, who ran a corner shop in Busan.

The star recollected that sometimes, he would have to walk two hours to school because he couldn’t pay for the bus. “When my friends went to the theme park with their parents, I clung more to basketball and just thought about my grandmother,” said Joo.

Having found his talent in the sport in elementary school, Joo went on to attend Korea University. When his grandmother’s health deteriorated, he dropped out and was about to get a job as a mechanic, but was given the chance to play as a trainee in the pro league.

Joo is the living proof of the saying “practice makes perfect.” In high school, he would run full-speed into a concrete wall and hit it with his shoulders, training himself for the impacts that often occur on the court. Even today, he still shoots 500 baskets every day.

“I’ve probably shot more than a million baskets,” said Joo. “A teammate once worried that if I kept clenching my teeth to try so hard, my teeth would all fall out before I’m 40. But thankfully, I’m almost 40 but they’re still there.”

The senior player was named a super rookie in his first year and an MVP for leading the Samsung Thunders to victory in 2001. In 2008, he also became the first player to be nominated as MVP from a team that lost the playoff match.

Some call him “Iron Man” for his seeming invincibility, but Joo has had four major injuries in his career. He hurt his shoulders in 2004 and his neck, hands and knees in 2006. To minimize his absence from games, Joo held off on having operations until the end of the season.

He also almost retired three times: when he dropped out of university, when he had surgery on his knees and when he failed to get a place with the SK Knights. Yet he persevered.

“Did you know I used to be called a nippy boy?” he asked. “Well, that’s all gone. They call me the middle-aged guard now.”

Joo’s childhood guardian, his beloved grandmother, passed away in 2002. “When they play the national anthem before the games, I always pray to my grandmother to help me win,” he said. Joo recollected a recent visit to the park in Busan where he scattered her ashes, saying, “I asked her to watch her grandson play his 1,000th game.”

Whereas he played for his grandmother in the past, now he plays for his family. His wife, three daughters and son are his biggest supporters. “I think it’s great how some players have worked so hard to keep in shape,” he said, “like Lee Seung-yuop [baseball player, 40] and Lee Dong-gook [footballer, 37].”

Joo had been first in the starting line until the last season, but this season, he’s sixth. “I want to make the most with the time I’ve been given on the court,” he said, “whether that’s one minute or one second. I want to remind myself of my poor and hungry childhood. I think that’s the Joo Hee-jung style.”

The Samsung basketball club will be selling character T-shirts for 1,000 won (83 cents) to celebrate Joo’s 1,000th game. All profits will go to a children’s cancer center.