‘How can there be this kind of country?’ asks poultry expert

‘How can there be this kind of country?’ asks poultry expert 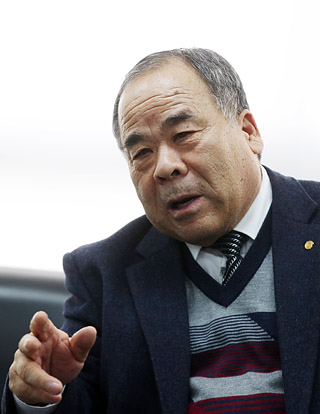 There are nearly 165 million chickens raised in the country.

Ever since the H5N6 avian influenza virus (AI) hit the country on Nov. 16, some 22 million chickens were culled. Some expects the number of culled chickens to reach nearly 50 million if the current pace continues.

“If that happen, we will run into an unimaginable problem,” said Oh Se-eul, head of the Korea Poultry Association. “We need to go through every possible measure, but we are under attack without a means to fight back, as the government didn’t establish one.”

The Ministry of Agriculture, Food and Rural Affairs said it can import eggs, but Oh said it is impractical and that it is not the time for the government to say such a thing. While he was doing the interview with the JoongAng Ilbo, he continued to receive phone calls from people in the National Assembly, government and on poultry farms.

Oh says the current AI crisis is similar to the recent movie “Pandora,” as both are based on the lack of a government system. The movie talks about chaos caused by the lack of preventive measures after a nuclear disaster.


Q. How great is the damage?

A. More than 20 million chickens are culled already. I think all Korean chickens will be burned to the ground. Farms are trying to prevent the virus from spreading but it is beyond their capacity right now. The AI first occurred in the country in 2003 and the government is still doing the same thing for 14 years now.


Why does the same problem repeat every year?

There is no fundamental road map planned out by the government. How can there be this kind of country? The government should have come up with plans to prevent the virus 14 years ago when it first hit the nation.

The government doesn’t have any plans to fight the AI and they are just trying to get over with the problem whenever they face the issue. The government has spent nearly 700 billion won [$579 million] in compensation for damages. They are spending a lot of money but farms run through losses every year.

They do, but they’re useless. There are four phases in the procedure, which goes from the attention stage to the critical stage. The manual says government officials need to get together for review before the phases, but they just don’t do it.

The manual is useless and our leadership is dysfunctional. In Japan, the prime minister’s office decided right away to cull 760,000 birds and this allowed them to avoid further damage.

Korea, on the other hand, culled 20 million chickens but is still not coming up with the right measures. They need to have plans to have a vaccine even though they don’t use it, but they don’t have it.

The policy was not to use the vaccine but they have benefitted from using it in the past. Using a vaccine solved foot-and-mouth disease coming from pigs and we have seen good results from using vaccines to deal with fowl typhoid in the 1990s.


Doesn’t it make it hard for Koreans to export if we use a vaccine?

We need to forget about exporting. The poultry business is not something we can earn lots of money on and we don’t have competitiveness in export markets. The United States, Brazil and Thailand are exporting a lot of poultry goods. The AI occurs in the United States, as well, and they have culled 500 million chickens last year.

They are now free from the virus. The United States doesn’t use vaccines. The country just is a good place to fight the virus as farms in the United States are located far away from each other. It is the same case for Japan.


Do you mean it is more problematic in Korea as farms are closer?

Yes. Many are concentrated in some regions. You can see that the damage was big in Pocheon, Gyeonggi, since there are lots of farms in the region. One of the other problems is that there are some farms that raise ducks and chickens at the same time.

Ducks tend to have better immune system compared to chickens so it is hard to find the virus in advance. The virus occurs a lot in the North Chungcheong area since there are lots of duck farms there. We know how the virus moves and occurs from looking at a map. The government needs to come up with a road map by looking at areas where migratory birds come and where poultry farms are concentrated.


It appears one needs to ask the Agriculture Ministry to do that.

I think it was a mistake for the vice minister of agriculture to say he will import eggs from countries that were not hit by the virus earlier this month.

He said he said it because a reporter asked him about the plans when he was not prepared to answer. The ministry just can’t say that.

Lots of farmers are very sensitive right now and many are complaining to me. I have told the ministry to come up with the road map to reduce the damage like other developed countries in the world.


What is wrong with importing?

It is not time for the agriculture ministry to talk about importing eggs. It is time for them to stop the virus. The import issue is something to be dealt with by the Ministry of Strategy and Finance or other government branches. I think it’s pathetic that they can say something like that at this moment.


I want to hear more about separating ducks and chickens.

The problem is that many duck farms and chicken farms are mixed with each other in the country. The AI tends to occur more often in ducks. The feeding environment for ducks is very unsanitary and they are omnivores.

We need to come up with plans for ducks. Japan has removed all duck farms that were located near chicken farms. I visited a chicken farm in Eumseong, North Chungcheong, and chickens being raised there were culled as the AI occurred in a duck farm located 500 meters [1,640 feet] away.


Isn’t it also a problem for people to spread virus?

Yes, and this is happening due to the lack of leadership in the country. There are 3,500 chicken farms in the country and 1,200 of them are for layer chickens [chickens that lay eggs]. The number of people involved in the distributing business is nearly 3,000 and they have a high chance of spreading the virus by traveling from place to place.

The poultry industry asked the government to designate a place to have all eggs delivered, so only retailers will have to visit such a place while farmers can just distribute their goods.

There are a couple of such places run by the private sector but there is no such facility operated by the government. I visited Japan and found that they already have adopted such a system. This can be another preventive measure.


I feel more and more like the problem is due to the government.

It is like this right now as the government is not doing anything. The government officials say they will come up with some plan every year but this doesn’t happen since many officials dealing with this issue get replaced every two years.

This is why there are no experts on this issue. We explain to high-ranking officials every time they come but they leave to other seats once we are done explaining problems to them. We need leadership.


It reminds me of the Sewol ferry disaster.

Sterilizing facilities are a similar examples. They need to use fumigators that do not use cold water since AI occurs more often during the winter. We have told the agriculture ministry to install such fumigators at the facilities but they failed to do it.

We need to proceed with the culling process within 24 hours of the outbreak in the case of AI, but it has been delayed for a week to ten days. Look at Japan. Prime Minister Abe Shinzo called it an emergency and stopped the virus by just killing 760,000 birds right away.


So speed is important?

In Korea, labor unions have protested against being involved in the killing process, so the government needs to find private companies that will do such work. They’re untrained, they’re unproductive. This is why I’m saying we are missing leadership.


The government is helpless?

Yes. It is like being at a war without any weapons.


Will this impact how people eat?

It will be a big problem if the local poultry industry collapses. The cheapest food with high protein is chicken. A Korean eats 280 eggs a year on average, which is about the same as those in developed countries eat. Many low-income households depend heavily on eggs. It’s a mistake for the government to say they will consider importing eggs to deal with such concerns.