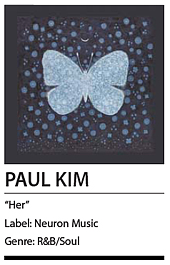 Singer and songwriter Paul Kim has a sweet voice that warms the heart, especially during this bitterly cold holiday season. And so, just in time, he’s released his second mini album, titled “Her,” composed of six songs. Kim wrote the lyrics for all six songs and wrote the music for five of them, bringing attention to his mellow style of songwriting.

In every song, he includes his uniquely soft transition back and forth from singing with his modal voice to singing falsetto, and that’s something to look forward to. The pieces sound so easily done, yet you’ll soon realize it’s not so easy once you try singing along. Kim’s voice, on top of his music, is the kind that makes listeners who hear it by chance to turn on their audio recognition apps, eager to find out who he is.

Although his name is relatively unknown, his digital single “Rain” won a lot of attention, was featured in a television commercial and ensured him many sold-out concerts.