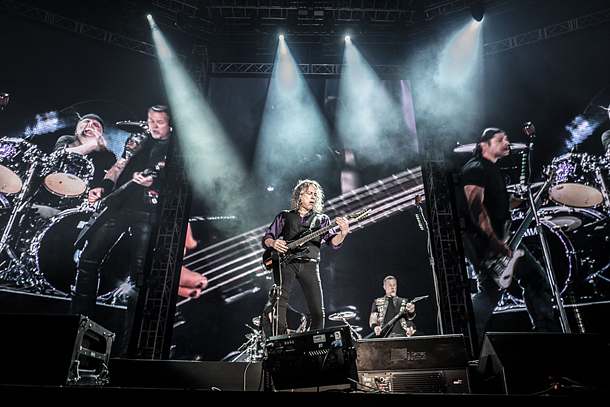 Heavy-metal giants Metallica tore up the stage with a medley of their newer songs and classic hits such as “Enter Sandman” at the Gocheok Sky Dome on Wednesday night. [ACCESS ENT]

One band has become so synonymous with the heavy metal genre that despite the arguably dying rock scene in the country, was able to fill a stadium of metalheads with just their reputation alone.

It was a loud, chaotic and beautiful display of a classic heavy metal show. Metallica brought a thunderstorm to the Gocheok Sky Dome on Wednesday, and needless to say, the crowd was electrified.

The thrash metal pioneers returned to the country after three and a half years to kick off the Asian leg of their Worldwired Tour, celebrating the release of their latest album “Hardwired… to Self-Destruct.” They played a wonderfully appropriate mix of new songs, classics, and fan favorites for a set that lasted two and a half hours.

The Japanese metal idol act Babymetal opened for the band, which was also their first time performing in Korea. The group has been gaining a loyal following in recent years, and pulled off the impressive performance of dance and metal the group has come to be loved for, not missing a single beat.

After a brief intermission, the main stage lit up, and immediately the band dove right in with “Hardwired” and “Atlas, Rise!” two of their lead singles from the latest album. The crowd roared with excitement.

Metallica was unquestionably professional on stage, with 35 years of touring experience translating into charisma and stage presence unlike any other. And despite the long set, the band members showed no signs of fatigue, with frontman James Hetfield’s voice growling at near studio-quality levels, bassist Robert Trujillo spinning with bass in hand, guitarist Kirk Hammett’s guitar solos wailing, and drummer Lars Ulrich keeping the act together. The band genuinely looked like they were having a good time, and provided a quality show rivaling some of their most famous past performances.

The first hour of the set list was one for the more dedicated Metallica fans, with two live debut performances of “Now That We’re Dead” and “Halo On Fire.” It was when the band suddenly shifted gears and dove straight into “The Four Horsemen” from their debut album that the stadium let loose, jumping and singing along to the band’s megahits.

The audience played off of the energy of the band, and the band noticed. At one point during the show, suddenly the smartphones that had been held high were replaced by pumping fists instead. By the time they struck the main riff from the rapid fast “Battery,” even the audience members all the way at the back of the seated areas were jumping on their feet.

“It was the best show of my life,” said 22-year old Kim Soo-yong, who came with his girlfriend from Ilsan. “Although I wasn’t the biggest fan of the band, the concert changed my mind, and my girlfriend said she had a good time too. I’m looking forward to going home and listening to their albums.”

Unlike many metal acts that deteriorate with age, the years have done a favor to Metallica as they have aged like fine wine. The energy on stage and adrenaline rush of the audience was the ultimate display of a great metal show. The performance will be one to remember for a long time.