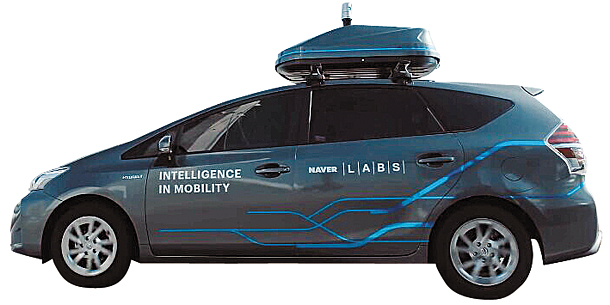 A self-driving car developed by the nation’s largest internet portal, Naver, will be tested on public roads as early as this month.

It will be the first time for a Korean tech company - as opposed to an automaker or university research team - to put an autonomous car on public roads.

According to Naver and the Ministry of Land, Infrastructure and Transport Friday, the portal’s self-driving car has completed all the verification processes needed to start test drives on roads.

“All testing has been completed and we are just waiting for the license to be issued,” a spokesperson from Naver said. A ministry official in charge of self-driving car testing confirmed that claim.

“It’s taking longer because Naver wants the license to be registered under Naver Labs, an affiliate under the company newly set up for research and development of an autonomous car,” an official from the ministry said. “Naver Labs is waiting to receive a corporate registration number. If the license was for Naver and not Naver Labs, it would have already been given.”

It is likely the license will be issued within the month, according to industry sources.

A voice-powered artificial intelligence system called Amica, developed by Naver Labs, is part of the technology. The AI assistant helps drivers find or book restaurants and hotels while driving.

According to the U.S. guidelines, drivers are still necessary for level 3 vehicles, but all safety-critical functions are automated under certain traffic or environmental conditions.

Level 4 vehicles are fully-autonomous on familiar roads while Level 5 cars, the top level, can perform as well as human drivers in every driving scenario.

With Naver’s, there will be 12 self-driving cars approved to make test runs on public roads in Korea.Carmakers Hyundai Motor and Kia Motors and research teams from universities such as Seoul National University and Hanyang University are preparing for test-drives after approval by the Transportation Ministry.