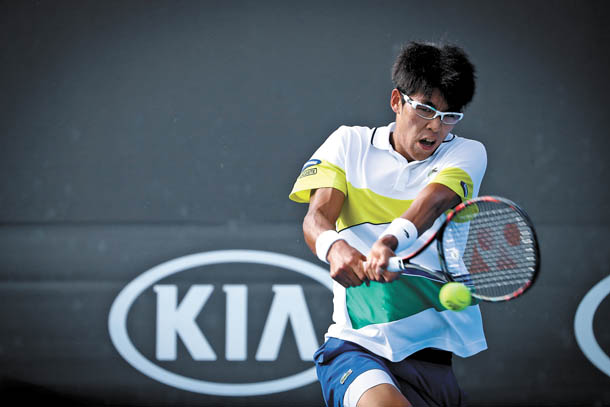 Korean tennis player Chung Hyeon competes during the first round of Australian Open on Tuesday, local time, in Melbourne, Australia. After defeating Renzo Olivo of Argentina, Chung advanced to the second round of the tournament. [YONHAP]

Korean tennis hopeful Chung Hyeon reached the second round of the Australian Open Tuesday after defeating Renzo Olivo of Argentina for his second career win at a Grand Slam tournament.

Chung, world No. 105, beat the 79th-ranked Olivo 3-0 (6-2, 6-3, 6-2) in the opening round of the season’s first major tournament in Melbourne. The 20-year-old, the highest-ranked South Korean male tennis player, will next face 15th-seeded Grigor Dimitrov of Bulgaria in the second round on Thursday.

This is Chung’s first Australian Open victory. Last year, the right-handed player suffered a first round exit after losing to then world No. 1 Novak Djokovic in his tournament debut.

It is also the second time that Chung has gone past the first round at a major tournament.

In 2015, he edged out James Duckworth in the first round of the U.S. Open, but fell to fifth seed Stanislas Wawrinka in the next round, despite taking each set to a tie break.

Against Olivo, Chung won the opening set 6-2 in 28 minutes. He trailed 2-1 during the second set, but the former Asian Game doubles gold medalist went on to win three straight games to make it 4-2.

Olivo, who reached the Australian Open’s second round last year, won the next game, but Chung took the control again with his forehand and eventually sealed the second set at 6-3 in 38 minutes.

Olivo, 24, broke Chung to start things off in the third set, but the Korean recovered to make it 2-2 and earned three straight games. In the closing game, Chung blew a 40-15 lead and allowed the game to go to deuce twice, but successfully wrapped up the match to collect his second victory at a major.

Chung had the first serve percentage of 57 percent, compared to Olivo’s 48 percent. Olivo also committed seven double faults, while Chung only had one.

With his serve holding steady, Chung was only broken once all match.

Chung improved to 2-4 in his career at Grand Slam events. Retired star Lee Hyung-taik remains the top Korean performer at the sport’s biggest events, having reached the fourth round, or the final 16, at the 2000 and 2007 U.S. Opens.