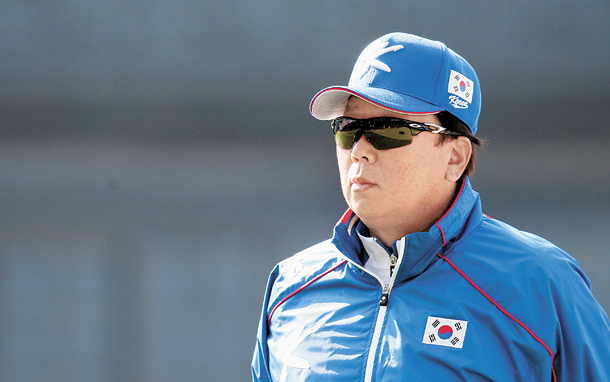 Sun Dong-yul will participate in this year’s World Baseball Classic as pitching coach for the Korean national team. [YONHAP]

“It’ll be a difficult tournament,” said Sun Dong-yol, a pitching coach for the Korean national baseball team, on his way to the team’s mini camp in Guam on Tuesday in preparation for the World Baseball Classic (WBC).

Sun left for Guam with Park Hee-soo of the SK Wyverns, Chang Si-hwan of the KT Wiz, Won Jong-hyun of the NC Dinos and five other players. With the addition of Cha Woo-jin, who is already in Guam for personal schedule, nine players from the national team’s roster will be participating in the mini camp.

Although Sun has plenty of experience under his belt as a player, heading to an international tourney, particularly the WBC, as a coach will come to him as a challenge. For one thing, he will have to figure out how to cope with the strict regulations of tournament, such as limited number of pitchers on the roster and off-days that must be given to the players, most of which are not in other international tournaments.

Q. Is there any rush preparing for the tournament?

A. We will be focusing more on physical strength than technical skills. To do that, we’ll first have to check their physical conditions. For pitchers, most of them probably will only be able to pitch as relievers.

Did you assign anything to the players before the mini camp?

Kim In-sik, head coach, told the players to be physically prepared. Once they arrive in Guam, they’ll only get the first day off and will start training right away on the second day. They’ll have to go through four-day and five-day sessions with only a day of rest in between. We’ll start using the training facility once the Samsung Lions are done with theirs. There are problems but they are only minor issues.

Who would be the key pitcher?

In WBC, a starting pitcher isn’t necessarily the star of the team. Due to the WBC regulations that stipulate a pitcher cannot pitch consecutive games, the role of the relief pitchers is important. It will be a difficult tournament, but the players have to play with confidence. Many have rated our team as the worst of all time, but with the right mindset, we will come out with good results.

Do you plan on being on the mound?

All decisions are made by the head coach. My duty is to check on players’ physical condition and report to the head coach. Since the starting pitcher can’t toss for long innings, it’s important to know when to relieve him.

What do you want to tell players?

A number of players who played in the WBC did not play in regular season games in the past. When training, players have to consider it the same as their club training. They should train as much as they normally do or more at times.

As a part of the national team, we tend to let players do their own training, meaning they don’t do any hard training themselves. In my experience, this is where everything goes wrong. I’ll ask them to do the same as when they were in the main league.

Does the addition of Oh Seung-hwan to the bullpen lineup help?

Definitely. Now, we don’t have to worry about the closing assignment. Overall, his presence makes our bullpen lineup stronger. His addition also allows us to put other closing pitchers earlier in the pitching rotation.