As web banks near, reform is hot topic

As web banks near, reform is hot topic 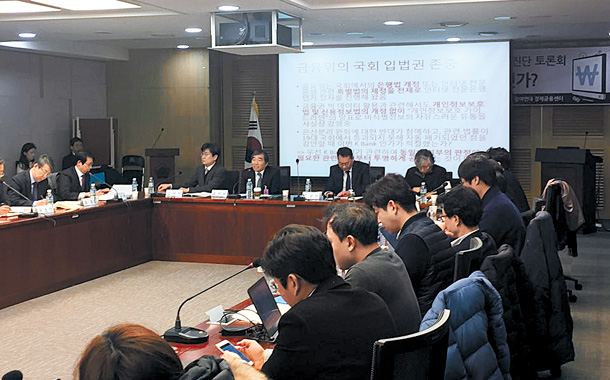 With K Bank in the final countdown to launch and Kakao Bank awaiting final approval from the government for a business license, the Korean banking industry, which has been in standstill for 24 years without any new players, is expected to face a new challenge: internet banks that render brick-and-mortar branches useless.

Regardless of the new wave in the industry, banking reform is a hot potato among analysts who are debating how to reform the regulation that limits nonfinancial companies from gaining ownership in banks.

One of the main concerns of those who opposed revising the current banking act was the possibility of exploitation. Current regulation stipulates a nonfinancial business operator cannot hold more than 4 percent of issued voting stocks of a financial institution, or 10 percent, if it will not exercise voting rights. The debate is whether to relax the regulation to allow IT companies, such as KT or Kakao, to acquire more shares with internet-only banks.

“If a nonfinancial company [a conglomerate, also known as chaebol in Korea], takes control of a bank, its governance will inevitably affected by the owner family,” said Jun. “The Tongyang Group crisis is a case where Tongyang, a non-financial company, had ownership over financial company Tongyang Securities and used it to conduct improper business practice when its affiliates were in a financial pinch.”

In 2014, Tongyang Group and its securities unit were mired in controversy for selling high-risk bonds to individuals in an attempt to salvage financially troubled subsidiaries such as Tongyang Cement. While the group dissolved, Tongyang Securities became what is now Yuanta Securities.

“Tongyang Securities was basically a private vault for the chaebol. If the group had majority ownership of Tongyang Bank, would it not have included the bank in its scheme?” said lawyer Kim Sung-jin. “If we can be assured that we can stop “bank-run,” or excessive withdrawal of money, by the shareholding company, then it would be safe to give more stakes to nonfinancial companies. But right now, it seems premature.”

Ko Dong-won, a professor of law at Sungkyunkwan University, argued that if an IT company becomes the majority shareholder, people without experience in the banking industry may end up in leadership posts. “Former Woori Bank chairman Hwang Young-ki [who was out of a securities company] had an aggressive management style and ended up investing in CDO and CDS which eventually incurred the bank a loss of 10 trillion won [$8.76 billion].”

Those who called for the revision of the act, however, cited the complicated structures of ownership as a possible risk that can limit efficient operation. Choi of FSC also added that “whether internet-only banks can provide innovative service to the public depends on the management that can efficiently and simultaneously utilize the core information technologies and capital.”

“All the FSC can do is to put more players into the market to promote competition and innovation,” Choi said. “But it is questionable whether financial institutions will take risks in trying something radical and new. This means capital of non-financial companies may be the solution but to do so, we need some improvement in the current market condition [such as the regulation.”

K Bank launched a beta test with employees and employees of its partners Thursday, a move that suggests its launch is near.