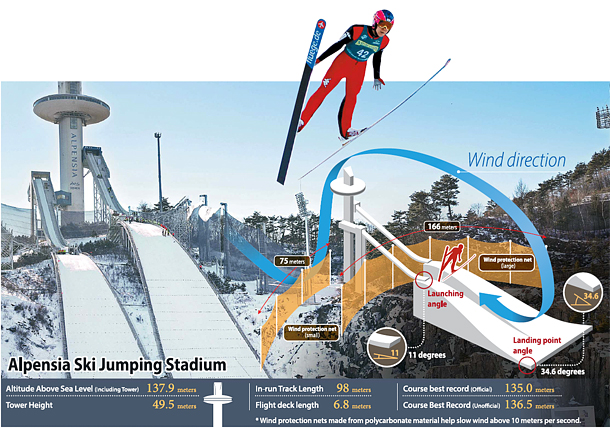 The Alpensia Ski Jumping Stadium was known for its magnificent design when it first opened in 2009. However, to players, it is known as a dangerous course due to its strong wind. Not only does the wind regularly blow at 10 meters (33 feet) per second, but its direction often changes.

According to the International Ski Federation (FIS), the play has to be suspended if the wind blows at a speed of three meters per second or more during an international ski event for the safety of players. At times, they cancel the event if the wind blows more than five meters per second. Since ski jumping requires players to ski downhill for 100 meters or more in the air, wind direction, speed, records and safety are important factors.

When the FIS inspected the Alpensia Ski Jumping stadium in 2013, they required Pocog to improve the ski jumping stadium facility so it can better control the 3 meters per second wind.

With that being said, the organizing committee closely analyzed the facility, wind characteristics and went through two simulations to install two wind protection nets made of black polycarbonate materials with metal supportive fixtures which cost four billion won ($3.5 million).

Unlike the regular nets created in symmetrical form, the nets at Alpensia Ski Jumping Stadium are created in asymmetrical form. From the grandstand view, nets on the right side largely covers the flight deck and the smaller net on the left side overlaps with a part of the main net to create double protection.

The installation of the nets now blocks the wind coming behind the deck, which travels back up in the air in a circular direction and allows the wind to blow in a reverse direction that helps the ski jumpers fly further in the air.

Crosswinds of 3 meters per second create buoyancy which allows players to be in the air for longer time.

Snow on the landing hill is created as the small water particles are sprayed in negative three to four Celsius temperature with the humidity of 60 percent or lower. Smaller particles make the surface smoother which create higher stability at landing.

Also, the committee hired a snowcat driver and a snow removing specialist from Norway and Canada for smoother track.

“The previous Alpensia Ski Jumping Stadium was more decorative, but with the improvements, it is now at a condition where it can host international events without lacking anything,” Kim said. “Now, we need to find a professional who can maintain the condition of the facility.”