Pirates’ Kang may return to court in DUI case

Pirates’ Kang may return to court in DUI case 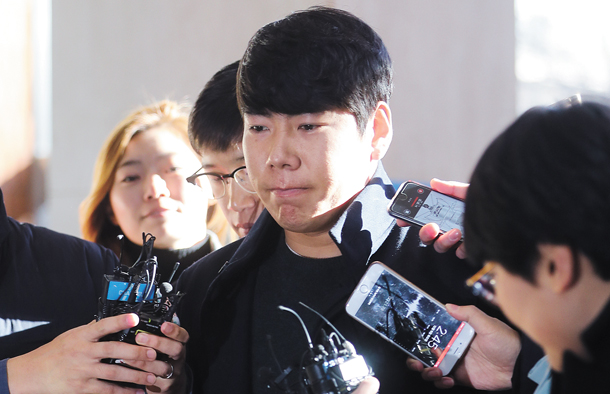 Kang Jung-ho, a shortstop for the Pittsburgh Pirates, may have to appear before court twice under DUI charges. He was arrested in December for leaving the scene after driving drunk. [YONHAP]

Pittsburgh Pirates infielder Kang Jung-ho may be asked to appear in court twice over his charges of driving under the influence of alcohol, a legal official said Tuesday, though he could schedule the trials so that they won’t affect his 2017 season.

Kang was arrested last December after leaving a scene of a DUI accident in Seoul. Prosecutors sought a summary order against Kang with a fine of 15 million won ($13,200) without a formal trial, but a local court said it would further examine Kang’s case through a trial.

Speaking to Yonhap News Agency, an official at the Seoul Central District Court explained normal procedures for the type of a trial that Kang will face. He said Kang’s trial hasn’t been scheduled yet, but the defendant must be present once the date is set.

The official also said he may have to attend two hearings.

“It’s possible that the sentence will be handed down in a second trial, after Kang tells the court in the first one whether he admits to his charges or not,” the official said.’

The court official said the trials may be pushed back in the case of “important business trips overseas or official duties.” It will require the defendant to submit a detailed request to the court.

“There is no legal problem to holding off Kang’s trials until after the season,” the official added. “When a defendant is staying overseas and isn’t in a position to receive necessary court documents, then trials can be postponed by a year or two sometimes.”

The December case turned out to be Kang’s third DUI arrest, which led to the revocation of his driver’s license.

It remains unclear, however, if Kang will be able to leave Korea in time to get ready for his third major league season.

The Pirates’ first full squad workout in spring training is Feb. 17 in Bradenton, Florida. Their general manager, Neal Huntington, recently said he expects Kang to be ready for spring training as scheduled.

Pittsburgh media reported last week that Kang has agreed to participate in an alcohol treatment program. Though participation isn’t mandatory, doing so is considered a mitigating factor in any discipline imposed by the club or Major League Baseball Commissioner’s Office.