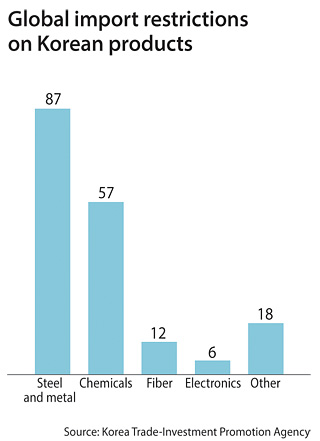 Import restrictions on Korea’s chemical and steel products are increasing under looming threats from increased protectionism in global markets.

The Korea Trade-Investment Promotion Agency (Kotra) on Wednesday said 19 new investigations were launched during the second half of last year on imports of Korean products.

While steel products have traditionally been most susceptible to import restrictions, lawsuits against chemical products grew rapidly last year. “It is notable that targeted petrochemical products are those carrying Korea’s recent export growth,” Kotra said in a statement Wednesday.

Still, steel is subject to the most import restrictions. There are already 87 restrictions including antidumping duties and safeguards imposed on Korean steel while 22 cases are under investigation. Import controls targeting chemical and steel amount to 144 cases, accounting for 80 percent of restrictions. The figure grew 3.1 percentage points compared to the first half of last year.

In total, 28 countries are imposing 180 import restrictions, including ongoing investigations on Korean products.

“Import controls on chemical and steel products are expected to further increase this year,” a Kotra spokesperson said. “The movements will be led by the United States, which is calling out its America First policy, and other countries including India and China.

“Apart from newly filed lawsuits, preliminary and final judgement on 22 steel-related cases and 15 chemical-related cases currently under investigation will be made,” the spokesperson added.

“To survive through the new wave of protectionism, Korean companies should always check on overseas import control policies and market conditions,” said Kim Sun-hwa, director-general of the trade policy support department at Kotra.