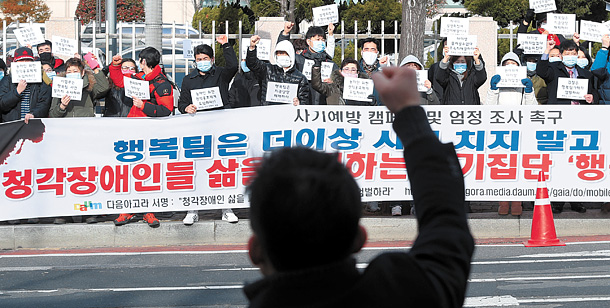 The alleged deaf victims of a scam that took 28 billion won (24 million dollar) from them stage a rally in front of the Changwon Jungbu Police Precinct in South Gyeongsang on Thursday to demand severe punishment for their scammers. [YONHAP]

Police arrested a group of people with hearing disabilities for allegedly pulling off a fraud scheme and snatching some 28 billion won ($24 million) from about 500 deaf people in Changwon, South Gyeongsang, on Thursday.

The Changwon Jungbu Police Precinct found that eight people with hearing disabilities allegedly told their victims from 2010 to 2016 that if they invested in a real estate development project to build apartments and factories, they would receive three to five times the amount of their investment within three months.

They also allegedly told victims that if the project proved successful, they would be granted expensive cars and pensions in return. Many of the victims borrowed money to make the investments.

These eight suspects, arrested for fraud and organized crime, and their roughly 500 alleged victims all belong to the same private online association of deaf people. Authorities found that the suspects and victims communicated via a group account on a mobile and internet app for non-public communications called Naver Band.

According to police, the group operated like a cartel, with three people in charge, an executive manager who is a 46-year-old woman, and managers of four subsidiary groups that operated by region. One team took care of communicating with members in Daejeon and Incheon, another in Gyeonggi, another in Busan and Changwon, and another in Daegu.

The group would allegedly make members swear loyalty, threatening to kill them or make their lives miserable, as well as the lives of their families for three generations, if they proved disloyal. Authorities said the managers of the subsidiary groups followed victims to banks and financial institutions when they borrowed money for investment, and received or made them wire the money. The managers then sent the money to the group’s executives.

The victims each reportedly handed over about 2 to 700 million won.

When the victims realized they were being scammed, some requested their money back or deactivated their accounts. Each time they did, however, four to five managers of the group would visit them in person and threaten them.

Yet many victims remained blind to what happened to them.

When authorities questioned the alleged victims, one reportedly told them, “We weren’t scammed; the one who is high up in the group is helping us.”

Authorities say this was a common response they received from quite a number of the alleged victims.

The three in charge of the group include a 44-year-old surnamed Kim. Authorities said he is seen as something like a savior figure to some members of the group.

But Kim, also deaf, was a scrubber at a public bathhouse and worked at a car wash center. He and the 46-year-old executive manager created the group to target people with hearing disabilities.

Police said Kim spent most of the 28 billion won he took and had only roughly 700 million won left. They found Kim bought dozens of Porsche, Maserati and Mercedes-Benz cars as well as brand-name clothes.

Authorities said they will root out all those responsible for the fraud scheme in this group, confiscate their illegal profit and return as much money as possible to the victims.