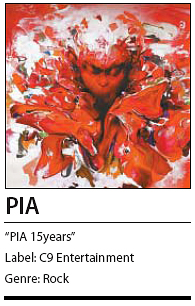 Pia’s unapologetic rock sound has been a staple among Korean rockers for 15 years without a single lineup change. Celebrating this impressive achievement, the band has released a compilation of eleven songs from their catalogue newly remixed and featuring guest artists in the form of an anniversary album. While the final result is rather unique for such a record, some uncanny reinterpretations of its songs may come as a shock to loyal fans.

The album includes fan favorites such as “Gloomy Sunday,” and “The Spiral,” in addition to the brand new single “You are My.” These tracks see a rather welcome reimagining, with “Gloomy” receiving a new makeover featuring a slower piano and vocals from Daybreak front man Lee Won-suk.

However, the remaining tracks seem more of a mishmash of missed opportunities, and while the remix efforts from electronica producing teams such as 1Piece are admirable, it is hard to imagine the album’s target audience. The alienation of its fans with the packaging of the record as an anniversary release may be a mistake on the band’s part.