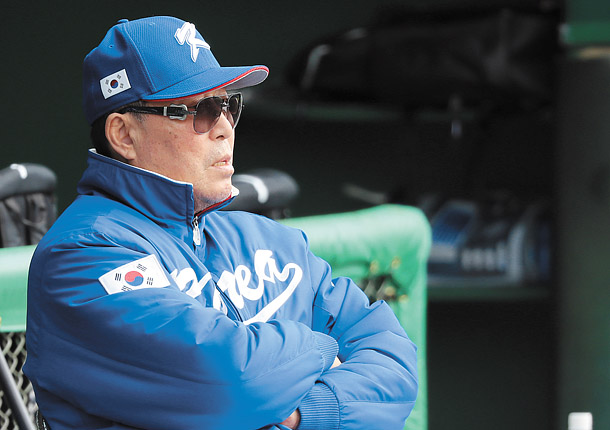 Korea is still trying to figure out who’s going to be hitting near the top of the order at next month’s World Baseball Classic (WBC).

Manager Kim In-sik got his hands tied when veteran second baseman Jeong Keun-woo withdrew from the tournament with a knee injury earlier this month. The All-Star for the Hanwha Eagles in the Korea Baseball Organization (KBO) would have been a nice option either in the leadoff spot or No. 2 hole, alongside his Hanwha teammate Lee Yong-kyu. Both are pesky contact hitters who can foul off pitches to extend at-bats and put the ball in play, not to mention speed on base path.

Without Jeong and the WBC fast approaching on March 6, manager Kim said Tuesday he has some options for the table-setting role.

Min Byung-hun of the Doosan Bears isn’t a prototypical, top-of-the-order kind of hitter, but he does bring some gap power. He batted a robust .325 in the KBO last year, while tying his career-high with 31 doubles and setting a new personal best with 16 home runs and 87 RBIs - all the while playing his home games at Seoul’s Jamsil Stadium, the league’s largest ballpark.’

The manager has a more conventional option in Seo Geon-chang, second baseman for the Nexen Heroes. He won the 2014 KBO MVP after setting the single-season record with 201 hits and 17 triples.

One other candidate is Lotte Giants’ outfielder Son Ah-seop. He has been a constant presence near the top of the leader board in batting average and hits.

On the sidelines of the team’s camp here in Japan, Kim said he’s leaning toward Min or Seo for the role as a sidekick to Lee.

“Min has been making solid contact already, and he could bat second or sixth,” the manager said. “Seo is also a great fit at the top of the order.”

All three players have hit leadoff for their respective KBO teams. And Kim said he will need more time to make his call.

“We’ll train for three days and rest on every fourth day, and we’re going to take it easy through Wednesday,” he added. “Then starting on Friday, the hitters will be looking at more breaking balls, and they’re going to start bunting drills.”

Korea will be in Okinawa until Feb. 23, and will play two Japanese pro clubs, the Yomiuri Giants and Yokohama DeNA BaysStars, during the camp.

The team will then return home to place Cuba and Australia, two other WBC contestants in a different group, in more practice games.

As far as Kim is concerned, there’s still enough time.’

Kim was in particular effusive about Min, saying he looked nimble. But Min himself said while he feels great, he still has a long way to go.

“I still need more reps in the cage,” he said. “I feel like I am in pretty good form, but I think the manager is being too kind.”

The WBC has always been played in early- to mid-March, a time when players, in an ordinary year, are just getting ready for the new season and may have difficulty getting worked up for tournament baseball.

Min insisted the timing won’t be an issue.

“I have no problem with playing this tournament in March,” he said. “This is when we play preseason games, and I don’t take any preseason game lightly.”