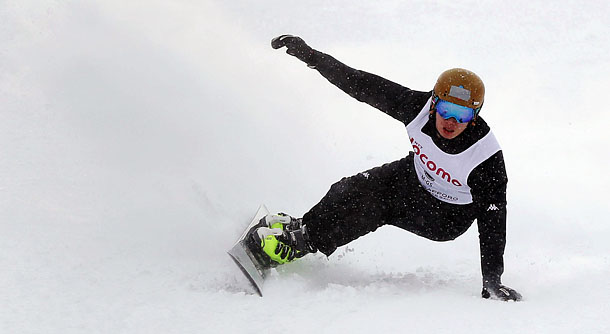 Lee claimed the men’s giant slalom race at Sapporo Teine, with the combined time of 1:35.76 after two runs. This was also Korea’s first snowboard gold medal at a Winter Asiad.

The medalists were determined after two runs. In the opening run, four Korean boarders occupied the first four spots, as Lee led the field of 22 boarders with 51.94 seconds, followed by Choi at 52.02, Ji Myung-kon at 52.27 and Kim Sang-kyum at 53.13.

In the second run, Kim and Ji had mediocre runs to fall out of contention. Kamino, only sixth in the first run, posted the fastest second-run time of 43.75, but it wasn’t enough to overtake either Choi or Lee.

Choi, racing just before Lee, finished his second run in 44.42 seconds. Lee then topped him with 43.82 seconds to clinch the gold by 0.68 second.

Lee arrived in Sapporo as the No. 5 in the men’s giant slalom on the International Ski Federation (FIS) World Cup standings this season, the highest among Asian snowboarders. He finished fourth in the parallel giant slalom at a World Cup race in Italy last December, the best World Cup showing ever by a Korean. Lee has also had two other top-five finishes at the World Cup this season.

The victory Sunday also erases disappointing memories from a week ago, when he got knocked out of the qualification round at the FIS World Cup in Pyeongchang, the Korean host of the 2018 Winter Olympics.

“I’ve been targeting an Asian Games gold this season, and I am so excited that I accomplished that goal,” Lee said. “This gives me a lot of confidence for the 2018 Olympics.”

In the second run, Jeong finished her race in 48.46 seconds for the total of 1:48.13. She had the second-fastest time in the second run but still came up 2.32 seconds out of the bronze medal spot.

Eri Yanetani of Japan won the very first gold medal of the Asian Games with a two-run total of 1:43.47. Zang Ruxin and Gong Naiyang, both of China, took home the silver and bronze medals, respectively.’