A silvery day for Korea at Asian Winter Games

A silvery day for Korea at Asian Winter Games

The third day of the Asian Winter Games in Sapporo, Japan, ended with Korea dropping down from its podium on the medal ranking.

As of Tuesday, Korea has six gold, seven silver and seven bronze medals, putting it in second after Japan.

In women’s long-track speed skating, Korea had a strong showing, winning silver in two out of three events that day.

In the women’s 500-meter race, Lee Sang-hwa took home silver, dashing her hopes of winning gold at what could potentially be her last Asian Games appearance. She was bested by Nao Kodaira of Japan, who finished 0.31 seconds ahead of Lee with 38.01 seconds.

Lee has been a dominant figure in the 500-meter event, winning gold six years straight at the World Cup and twice winning gold at the Olympics. 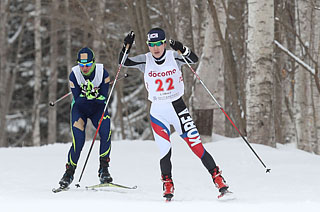 But this season, she’s been suffering from an injury in her right calf, resulting in less-than-stellar performances.

Not only did Lee finish the Asian Games without a gold medal, she was also unable to win gold at any World Cup event for the first time in six years.

The rivalry between Lee and Kodaira had been building all season long, with Kodaira so far having the upper hand. The Japanese speed skater has dominated the 500-meter event this season with eight wins, including one at the International Skating Union Single Distances Speed Skating Championships hosted in Korea on Feb. 10 in Gangwon.

Lee’s loss means she may have to end her Asian Games career without a gold medal in the regional event.

In women’s cross-country skiing, Lee Chae-won started the day with a silver in the 10-kilometer free race. She finished in 35:49.0, 24.4 seconds behind Yuki Kobayashi of Japan.

In Asia, though, Lee has been a dominant cross-country skier, as she won the event at the 2011 Asian Winter Games in Kazakhstan. 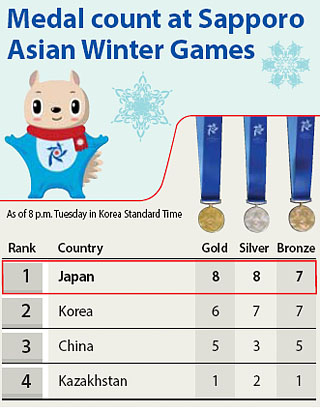 In short-track speed skating, one of Korea’s strengths, the team continued to add medals, collecting three from the men’s and women’s events.

In men’s 500-meter, Seo Yi-ra won silver, finishing in 40.842 seconds. His compatriot Park Se-yeong won bronze in the same event, making it his second medal at the Asian Games, after he finished the race in 41.482 seconds.

In women’s 500-meter, Choi Min-jeong, who won gold just a day earlier in the 1,500-meter race, also won her second medal at the Asian Games as there wasn’t a third-place finisher in Final A.

Shim Suk-hee, another favorite in the race, was disqualified earlier in the semifinal race in Final A after getting tangled up with Fan Kexin of China in her final lap.

In ice hockey, the Korean women’s team lost its match against Kazakhstan 1-0 on Tuesday. Korea has to win their match against China on Thursday for a chance to take home bronze.