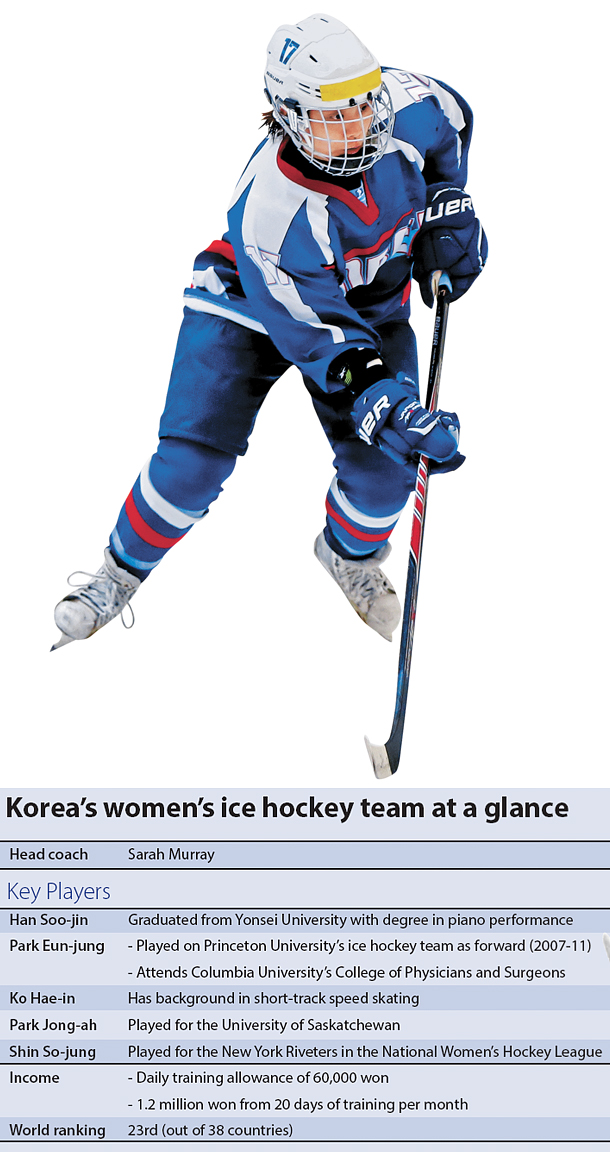 The Korean women’s ice hockey team has never had a single win in its 19-years history - until Saturday, when it beat Thailand 20-0 in this year’s Asian Winter Games in Sapporo, Japan.

Now, the team has the potential to medal.

It’s a milestone, not least because in the four Asian Games prior to this year, the team lost all 15 games it played and scored only four goals.

The elation was short-lived, as the team, currently ranked 23rd in the world, lost to seventh-ranked Japan 3-0 on Monday and lost again on Tuesday to Kazakhstan 1-0.

Left: A poster for the movie “Take Off 2,” based on the story of the Korean women’s hockey team. Right: The Korean team fights for the puck during its game against Japan at the Asian Winter Games in Sapporo, Japan, on Monday. [JOONGANG PHOTO]

But there’s still hope. If they can beat China on Thursday, they can take home bronze, a far cry from their performance at the Asian Games 10 years ago in Changchun, China, where the Korean team suffered a blistering 29-0 defeat against Japan.

“At the time, Japan had 136 shots on target, and we couldn’t get past their offense line,” said Shin So-jeong, who has been a goalkeeper on the Korean team for more than 10 years. “My entire body was bruised from blocking pucks coming at an average speed of 100 kilometers per hour [60 miles per hour], but what hurts most is when others talk about our team in negative ways.”

In the Olympics, women’s hockey has not reached the level of popularity enjoyed by men’s hockey.

Since the Korean team was established in 1998, it has never managed to fill its 22-player roster. At this year’s Asian Winter Games, they only fielded 20 players.

And like the tried and true plot of a cliched sports movie, the national team is a ragtag group of women drawn from diverse backgrounds.

Han Soo-jin, a graduate of Yonsei University in Seoul, has a degree in piano performance. Ko Hae-in is a former short-track speed skater. Park Eun-jung, a Korean-Canadian who once played hockey for Princeton University, is currently on leave from her medical studies at Columbia. She obtained Korean citizenship in 2015 just so she could compete in the PyeongChang Winter Olympics next year.

But the most senior among them, and perhaps the most impressive, is veteran goalkeeper Shin. Hoping to learn more about hockey from the sport’s birthplace, she filmed herself playing and sent the reel to schools in Canada. Her efforts landed her at St. Francis Xavier University in Nova Scotia, where she was recruited as a starting goalkeeper in 2014.

In 2016, she became the first Korean to join the National Women’s Hockey League and still plays for the New York Riveters.

Korea has been working to boost the caliber of its women’s hockey team. In 2014, it hired Sarah Murray as head coach.

Murray is the daughter of Andy Murray, former head coach of the Canadian team, and has played defense for the University of Minnesota-Duluth. She said she places emphasis on players’ mind-set, saying that once players think they are small, they will be unable to compete against bigger rivals.

With the help of the Korea Ice Hockey Association, the team was able to travel to Minnesota in December for off-season training.

Looking toward the future, the women’s team already has a spot at the PyeongChang Olympics since Korea is hosting the games.

“Others will say it’s a dream, but our goal is to win one game at the PyeongChang Olympics,” Shin said.