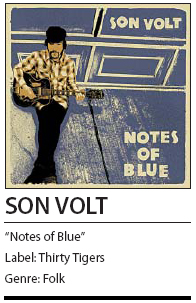 If Merle Haggard is the defining voice of country music, Jay Farrar might be the artist you’d turn to if you had to explain the Americana genre through the work of just one singer.

Farrar is the creative force behind Son Volt, a band he put together in the mid-1990s after he and Jeff Tweedy dissolved Uncle Tupelo and went their separate ways. His singing style, then and now, calls to mind backroad landscapes and somewhere-in-Louisiana weariness with a style so distinctive that it helped redefine the contours of the genre.

Having given birth to the term “alt-country,” the signature Son Volt sound lives again on “Notes of Blue,” a mature album that builds on previous milestones to explore new dimensions of the blues. The song order seems significant, though. The first two cuts, “Promise the World” and “Back Against the Wall,” invite listeners in with an earthy blend reminiscent of Son Volt’s powerful early work. After that the album grows more daring but less accessible, mixing blues stylings influenced by Mississippi Fred McDowell and Skip James with unorthodox tunings and other musical adventures. AP