Korea now up 2-0 in exhibition series against Cuba

Korea now up 2-0 in exhibition series against Cuba 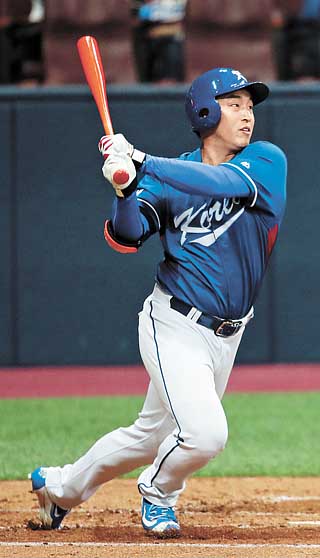 Son Ah-seop led the team with four hits during the second exhibition game against Cuba on Sunday. [YONHAP]

After winning its first game against Cuba 6-1, Korea went on to defeat Cuba 7-6 in their second exhibition game on Sunday ahead of the World Baseball Classic (WBC).

The home team erased a 3-1 deficit in a six-run seventh inning to beat Cuba for the second straight day at Gocheok Sky Dome in Seoul. On Saturday, Korea prevailed 6-1. Korea will host Pool A action in the first round against Israel, the Netherlands and Chinese Taipei, starting on March 6. Cuba will face Japan, Australia and China in Pool B play in Tokyo.

The team’s next exhibition game will be against Australia at 6:30 p.m. Tuesday, back at the dome.

Of the nine hits on Sunday, Son Ah-seop, batting sixth for the second straight game, had four. He hit a solo home run on Saturday and was 4-for-5 with two RBIs and two runs scored on Sunday.’

He got himself into a jam with two outs in the first, with a walk and a double. He got William Saavedra to ground out to third to escape the jam.

After a three-up, three-down second inning, Yang gave up two runs in the third.

Yoelkis Cespedes led off the frame with a triple, and Roel Santos drove him home with a single to left.

Yang retired the next two batters, but then Alfredo Despaigne hit an RBI single to make it 2-0 Cuba.

Korea was held in check by Cuban right-hander Vladimir Banos, who held the opponents to a run on three hits in 4 2/3 innings while striking out six. Korea’s first run came in the fifth on a double by Lee Yong-kyu.

Two Korean relievers held Cuba off the board in the fourth and fifth, but Chang Si-hwan gave up a two-out single to Frank Morejon for a 3-1 Cuban lead.’

But Korea put up a six-spot in the seventh on five hits and three walks.

Son led off the inning with a double. After a walk, pinch hitter Yang Eui-ji hit a grounder to shortstop Yordan Manduley, who sprained his ankle trying to make the play and made a bad throw to second.

That allowed the lead runner to score for Korea, now with men on second and third with nobody out. Lee Yong-kyu’s single made it a 3-3 game, and Park Sok-min followed that up with an RBI double for a 4-3 Korean lead. With the bases loaded later in the inning, Min Byung-hun hit a sacrifice fly for a 5-3 cushion. After a walk loaded the bases again, Son knocked in two more runs with a single.

Cuba got a run back in the seventh on a single by Frederich Cepeda. With two outs and a man on in the ninth, Korean reliever Won Jong-hyun gave up a triple and then a double to let Cuba cut the deficit to 7-6 before slamming the door shut.

During its first game against Cuba on Saturday, the starting pitcher Chang Won-jun of the Doosan Bears in the Korea Baseball Organization, managed to throw four shutout innings to help the team win. Of the 57 pitches Chang threw, he allowed three hits and struck out three.