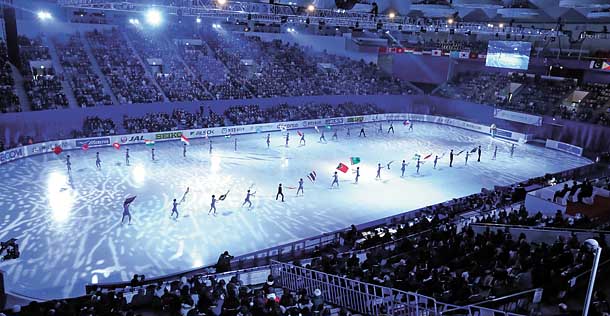 The 2017 Sapporo Asian Winter Games concludes on Sunday with a closing ceremony at the Makomanai Indoor Skating Rink. [YONHAP]

The Sapporo Asian Winter Games was all about records as Korean athletes won various medals in unexpected events.

The weeklong 2017 Asian Winter Games in Sapporo has come to an end as Korea finishes second in the medal standings with 16 gold, 17 silver and 16 bronze medals.

Aside from short and long track speed skating, winter sports have not been considered Korea’s strength. However, the Asian Games showed great potential for the 2018 PyeongChang Olympics in ski events. 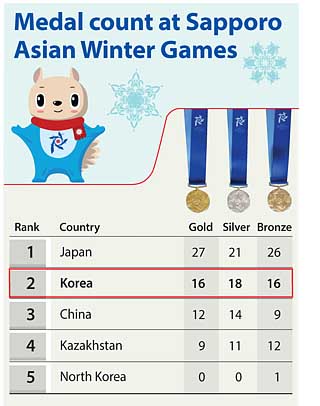 The men’s hockey team finished the tournament with a great success by winning a silver medal, the best finish in Korean hockey history. Since hiring Jim Paek, former National Hockey League (NHL) defenseman for the Pittsburgh Penguins, Korea has beat Japan in each of their past three ganes.

Not only that, they had a shut-out win against China 10-0 in their final game on Sunday. Although they lost their hope of winning a gold medal in their first game by losing to Kazakhstand 4-0, the team came back strong and won the rest of its games.

Korea continued to show strength in short track and long track speed skating as they won a majority of Korea’s gold medals in the category.

Lee Seung-hoon set a new record for the most number of gold medals at the Asian Games by winning a total of seven, three at the 2011 Astana and Almaty Asian Winter Games and four at the 2017 Sapporo Asian Winter Games. Despite Lee’s leg injury during the International Skating Union World Single Distances Speed Skating Championships at Gangwon, he managed to win gold medals in all the categories he raced in.

In women’s long track speed skating, although Kim Bo-reum was not able to win gold in women’s mass start, she managed to do so in women’s 5,000 meters race.

In short track speed skating, Korea continued its strong showing by finishing the event with a total of five gold medals.

The rivalry between the two teammates began when Choi Min-jeong and Shim Suk-hee raced in the same events and finished the 1,500 meters with Choi winning gold and Shim in second. Although Shim Suk-hee got off to a slow start at the event and was disqualified in the 500-meter event when she got tangled up with Fan Kexin of China, she still managed to finish strong by winning two gold medals on the last day. At the end, both Choi and Shim finished with two gold medals.