Navigation is key to future cars

Navigation is key to future cars 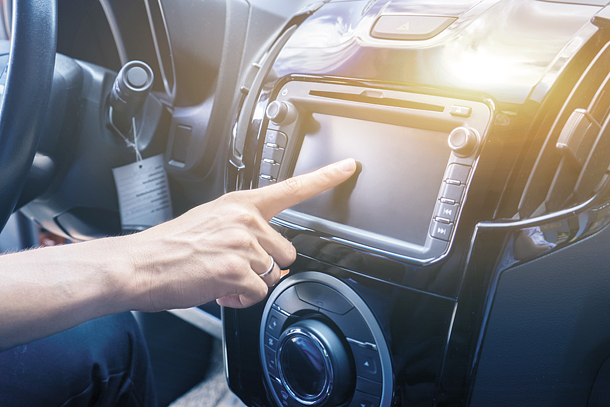 At this year’s Consumer Electronics Show in Las Vegas, Nvidia’s self-driving car was strutting its high-end technological stuff. When a passenger in the car, called the BB8, announces his destination, the GPS automatically provides a route. Traffic signals and other objects on the road are detected through cameras and sensors in the vehicle.

The car changed lanes and maneuvered onto expressways like an actual human being was behind the wheel. None of this can be done without the GPS, the most important technology for a self-driving vehicle.

The technology has developed significantly over the period.

“Not only telecommunication service providers but also large portal service providers are competing fiercely in the navigation market,” said Lee Jong-gap, a manager at SK Telecom’s T map department. “The competition will expand from the smartphone sector to connected cars and autonomous vehicle sectors.”

SK Telecom, which launched its T map service in 2007 when 3G networks were introduced, has developed connected car technologies with BMW. SK will announce a new autonomous vehicle business with the U.S.-based Nvidia at the Mobile World Congress 2017 held in Spain later this month.

In order for self-driving vehicles to safely run on roads, they need to perceive traffic situations and distances from other objects, which require accurate map data and navigation technologies. Automakers, mobile service providers, smartphone manufacturers and internet portals are cooperating with each other to develop autonomous vehicles.

The first digital navigation device was the Etak, developed by a U.S. auto part manufacturer in 1985. The market grew rapidly starting from 2000, after military-use GPS was opened up to the public.

Japan was ahead of Korea in the first generation of navigation services, but Korea surpassed the Japanese technology in 2002. The telecommunication industry believes SK Telecom’s T map was the first mobile navigation service introduced in the world. T map offered basic services at first, but still provided users information of about 30,000 vehicles on roads and gave routes to destinations. 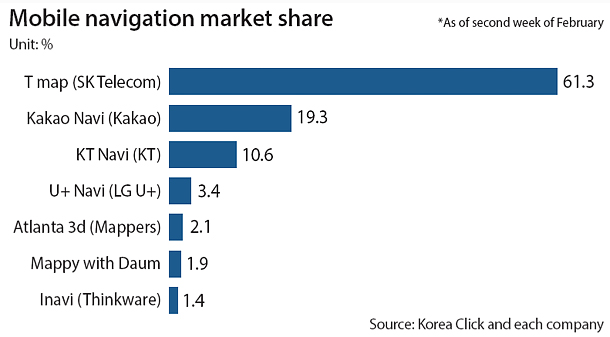 In the early 2000s, the technology wasn’t available to combine GPS with mobile phones, so people needed to buy separate devices to receive live traffic information. There were only about 100,000 users affluent enough to buy a navigation system at the time.

According to research firm Korean Click, T map accounted for 61.3 percent of total market share as of the second week of this month. It was followed by Kakao Navi at 19.3 percent and KT Navi at 10.6 percent. LG U+ is behind of the competition, accounting for 3.4 percent of the total mobile navigation service users.

The navigation market grew rapidly as more people started to use smartphones in 2010. Kakao and LG U+ entered the market starting from 2010.

“We are finding ways to survive the competition by providing services like giving information on distances between other cars while driving, which is quite a difficult service for mobile navigation service providers,” said a representative of Fine Digital.