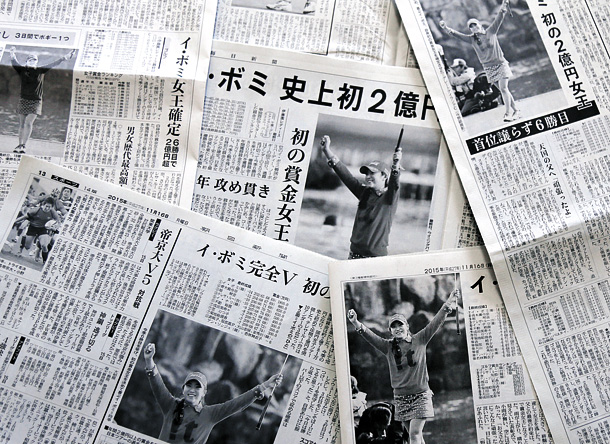 Lee Bo-mee made headlines in Japanese newspapers after she surpassed the JLPGA’s prize money record in 2015. [YONHAP]

Lee Bo-mee, two times leading money winner of the Ladies Professional Golf Association of Japan (JLPGA) tour, hopes to accomplish more than what she did in previous years.

“My goal in 2017 is to finish the season with an average score in the 60s,” Lee said during an interview with Japanese newspaper Sports Hochi on Monday.

Since she is the top golfer on the JLPGA tour, she set her own goal to challenge herself. Her goal of finishing in the 60s in average scoring shows her strong will to be better than she was in 2016.

Lee has been an outstanding player on the JLPGA tour as she finished first in the scoring average, 70.092, which surpasses the previous record of 70.132, set in 2014 by Ahn Sun-ju. 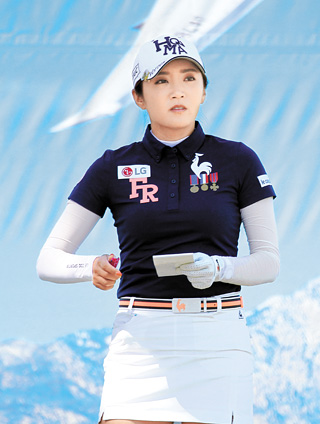 During Lee’s time on the Ladies Professional Golf Association of Korea (KLPGA) tour, which she joined in 2007, she won four events. After Lee’s successful season on the tour in 2010, she decided to play on the JLPGA tour to follow the path of Ahn and went through a qualifying school in 2011.

Since she joined the tour in 2012, Lee has won in 20 events including her second place finish at the 2012 Mizuno Classic, an event hosted by both the JLPGA tour and the Ladies Professional Golf Association (LPGA) tour. In 2015, Lee won seven events without any major tournament wins, the most wins in both the men’s and women’s Japanese tours, and added another five wins in 2016.

Lee was the JLPGA leading money winner, the player of the year and recorded the lowest scoring average for two straight years in 2015 and 2016, the first time in the tournaments history.

With her success, Lee was ranked as high as 14th in the world ranking in May of 2016, but due to the competitiveness in Korean women’s golf, she was unable to compete at the 2016 Rio Olympics.

“I want to play my hardest in the 2017 season without thinking about my accomplishments that I made in 2016,” Lee said. Lee arrived in Okinawa on Sunday to prepare herself for the tournament starting this weekend.

During her interview with Hochi Sports, she made it clear that her injury on her left index finger, which she mentioned in her instagram post three weeks ago, will not be a problem this season.

“It’s one of those occupational hazards,” Lee said. “I took a month off after my season and I felt a pain in my finger as I practiced for the first time in a month.”

Lee returns to the course and will play in her first tournament of the season at the Daikin Orchid Ladies Golf Tournament on Thursday.