A cynical look at the life of a struggling artist

A cynical look at the life of a struggling artist 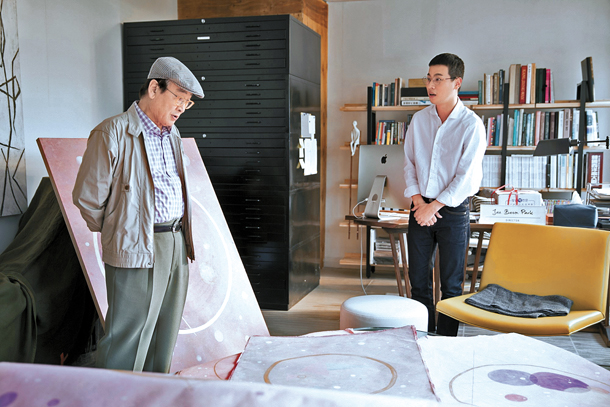 “The Artist: Reborn,” which will be unveiled on Thursday, cynically touches on the art world and the ironies within it. [CONTENTS PANDA]

Who deserves to be called an artist and who does not? Though the line may be very vague and subjective, the upcoming “The Artist: Reborn” touches on the subject in a witty and delightful way.

Directed by rookie director Kim Kyeong-won, of the short film “God Does Not Answer” (2010), “The Artist: Reborn” debuted at last year’s Jeonju International Film Festival and Seoul Independent Film Festival, and will be released nationwide next week.

Starring actress Ryu Hyun-kyung of “Office” (2014) and actor Park Jung-min of “DongJu: The Portrait of a Poet” (2016), the story follows an undiscovered yet talented Korean artist named Giselle (Ryu), who returns to Korea after years of studying Oriental Art in Denmark.

After a number of failed attempts to make a living off of her work, she encounters an art gallery representative Jae-beom (Park) who decides to help Giselle open her first exhibition. But soon after they meet, Jae-beom finds her dead.

Giselle’s death unexpectedly leads to her sudden stardom, making the price of her work soar. Seeing an opportunity, Jae-beom, who has all of Giselle’s works in his gallery, works to raise the price of her works even higher. Then, the artist comes back to life and Jae-beom struggles to hide the fact that she is alive from the public in fear that the value of her work will fall.

“The film is cynical,” said the director during a press preview earlier this week. “I have long admired the world of art and have always felt curious about the people who succeed in that world,” Kim said. “I hope the audience can find true value behind that cynicism.”

Kim added that, “Though [the film] is based on art, it also tells the story of someone’s faith. I hope this movie can comfort or arouse sympathy from those who are confused over the choices they are about to make.”

Park said, “It’s very difficult for an actor to be able to [have a chance to] stand in front of the audience, and it’s also difficult to endure the moments you have to compromise and continue to keep your essence. While shooting this movie, I could better sympathize with such dilemmas that I have long had as an actor, and I wished to portray that directly through my acting.”

Veteran actor Lee Soon-jae also appears in the film as a successful artist.

The film is slated for release on Thursday and runs for 96 minutes.