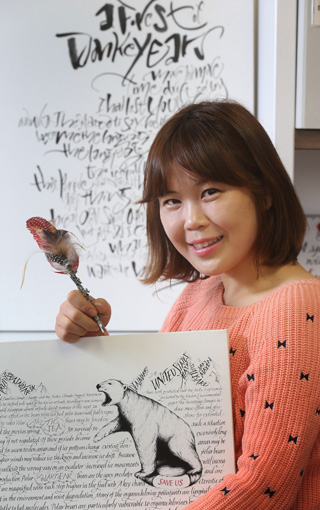 Kim Eun-jeong says the allure of calligraphy is in confronting the disparate shapes in the work. [KIM SANG-SEON]

Kim Eun-jeong, 35, is a chalk artist, calligrapher and a woman of letters. The vintage feel of chalk is a fascination not shared by many, but she has had success with showings at places and events such as Paul Basset, Emart Town Peacock Kitchen and the International Slow Food Festival.

“Everyone has that memory of writing something on the blackboard and wiping it off with an eraser,” she says. “In order to keep that feeling alive, that is how cafes and restaurants came to write seasonal drinks and menus in chalk.”

Kim is a calligrapher who realized her dreams in childhood. She attended a calligraphy academy and fell in love when she understood the pleasure of the brush on paper and the black sheen of the dripping wet ink.

Even though she wrote every day, she was enthused in how her characters were always different shapes. She was able to live her dream of becoming a calligraphy artist by her teens. “As I spent more time writing letters,” says Kim, “it felt like my letter writing and emotional intelligence increased.”

In her twenties, Kim spent eight years as a web designer. “Looking at a PC monitor for ten hours a day, there wasn’t even an instance as a web designer where I met my team leader who was just one meter away,” said Kim. “I thought that if I kept on doing this dreary work, my life would fade away.”

She said that is how she came to reminisce about her time of slowly savoring writing one letter at a time.

Doing web design in her thirties, Kim started preparatory work to be a calligrapher who could learn to master the feeling of the brush.

“I applied to an art academy and picked up the brush again and went off on an aimless handwriting journey overseas,” said Kim. “Looking at overseas calligraphers, the sentiments conveyed differed according to the tools used such as pen, chalk and brush, but I realized the basic sketch was the most important.”

She also established a calligraphy workshop at Heyri Art Village in Paju, Gyeonggi.

Kim said she always drew inspiration from the ordinary conversations she had with friends and acquaintances about the sites and scenes she saw in person.

The work of a calligrapher is often varied. Last winter, she was engaged to producing invitations for luxury goods companies such as Dior and Burberry, and worked on companies’ Photoshop needs, including advertisement slogans and copy jobs.

She also develops calligraphy and diverse design products, too, while running a calligraphy class and lecturing at a university. Kim has even released a new book titled, “Handwriting Starting Today.”

“Just as raising a thatch house at a folk village has become a special skill,” says Kim, “it is heartbreaking that it has become an age where one has to study handwriting. There’s a thought that the worn-out people in this speedily advancing society might actually want to understand how to go slower.”

“Calligraphy’s allure is that it is properly mixed with the analogue and urban sensibility,” Kim says, adding that, “While on a job with my father, finding something modern in traditional handicrafts was the greatest positive.”

Her father works with lacquer in Tongyeong, South Gyeongsang.