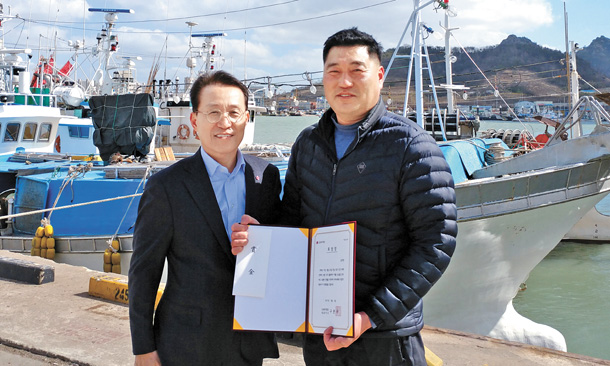 LG Foundation on Thursday awarded 30 million won ($26,000) to Kim Guk-gwan, captain of a fishing boat who saved the lives of seven other sailors in a separate boat that caught fire on the sea off Jindo Island in South Jeolla on Feb. 22.

He was told by the maritime police that a boat nearby was on fire and its entire crew was in the ocean after escaping the vessel.

To get to the scene as soon as possible, Kim ordered his staff to cut their fishing nets loose.

Kim succeeded in rescuing all seven sailors in just 25 minutes after the fire broke out and helped them immediately change clothes and socks that he had so they wouldn’t suffer hypothermia.

Part of the 30 million won prize is to fix his fishing net, LG said.

This isn’t the first time the 49-year-old saved the lives of others. He rescued 10 sailors from a fishing boat wrecked off the southern coast of Soheuksan Island in Sinan, South Jeolla, in 2004.

The cash prize is part of the so-called “Righteous People Prize” LG Foundation established in 2015 with the goal of “returning favor to the citizens who have sacrificed themselves for the country and social justice as part of corporate social responsibility.” The foundation has awarded 36 citizens so far.

On Feb. 6, LG Foundation awarded Lim Jeong-su, 47, who helped save passengers from a bus on fire caused by an arsonist in Yeosu, South Jeolla. Lim also helped catch the criminal.

“We will continue raising social interest in righteous action by ordinary neighbors through the award,” said LG Foundation.