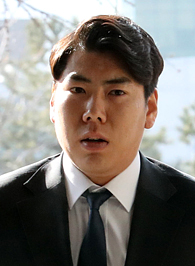 The Seoul Central District Court sentenced Kang to eight months in prison, which is to be suspended for two years, for leaving the scene of a DUI accident in Seoul on Dec. 2.

But the court determined Kang’s case was serious enough that it must be processed through a trial.

The ruling clears the path for Kang to travel to the United States and join the Pirates in spring training long underway. Kang has had to stay in Seoul for his trial on Feb. 22 and verdict hearing Friday.

In the immediate aftermath of the December accident, a friend of Kang’s in the car, surnamed Yoo, claimed to have been behind the wheel, but police later found out Kang had actually driven the car, with the blood alcohol content of 0.084 percent. The legal limit in Korea is 0.05 percent.

The court ordered Yoo to pay a fine of 3 million won on Friday for lying to police.

He was previously caught for DUIs in August 2009 and May 2011, both when he was playing for the Nexen Heroes in the Korea Baseball Organization.

Pittsburgh media have reported that Kang has agreed to participate in an alcohol treatment program.

Though participation isn’t mandatory, doing so is considered a mitigating factor in any discipline imposed by the club or Major League Baseball Commissioner’s Office.