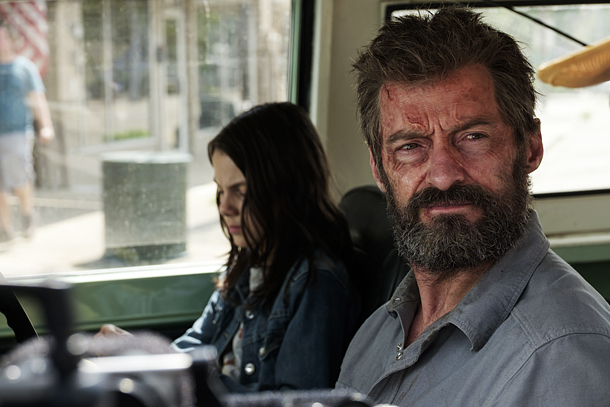 The superhero spinoff “Logan,” directed by James Mangold, clinched the top spot over the weekend. Despite its restricted rating, Hugh Jackman’s last hurrah as Wolverine sold 633,000 tickets from Friday to Sunday at 954 screens, adding to the total of 1.08 million sold since its release on Wednesday.

The film, which is more a drama than a typical superhero flick that audiences have seen over the years, sheds light on the human sides of aging professor, Charles Xavier, and Wolverine, who makes a living as a limo driver. “Logan” has so far raked in 9.4 billion won ($8.4 million) in Korea.

Jackman confirmed during a live video conference with Korean press last week that “Logan” is his final performance as Wolverine, whose claws he has worn for 17 years.

Local thriller “Bluebeard” debuted in second with 433,000 admissions over the three days. Directed by Lee Soo-yeon of “Modern Family - E.D. 571” (2012), the movie revolves around the struggles of a bankrupt doctor (Cho Jin-woong), who becomes suspicious of the people around him while working at a hospital in a mysterious town where unresolved murders had occurred. It has earned 7.57 billion won since it hit theaters on Wednesday. 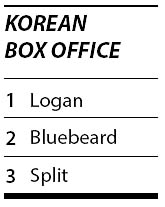 The two most popular films accounted for 62 percent of the weekend’s ticket sales with “Logan” and “Bluebeard” accounting for 36.3 and 25.7 percent each.

“La La Land” and “Moonlight,” which were honored at the Oscars last week, jumped up on the chart with the former jumping up eight spots to rank seventh and the latter jumping up third spots to mark ninth.