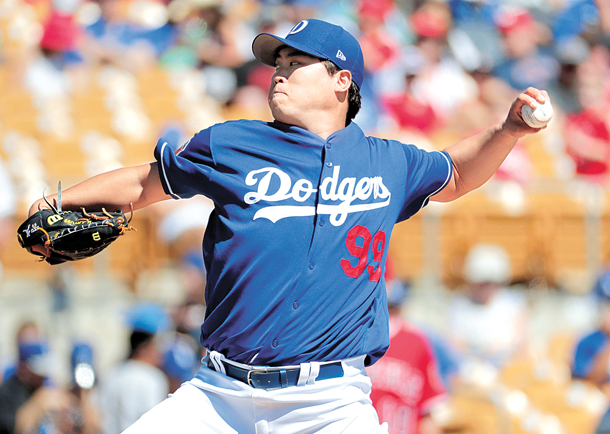 Ryu Hyun-jin of the Los Angeles Dodgers threw a solid game in his return from multiple surgeries, raising hopes of a better season ahead after an extended absence.

Making his first appearance since July, the Korean left-hander tossed two scoreless innings against the Los Angeles Angels at Camelback Ranch in Glendale, Arizona, on Saturday. He allowed one hit and struck out two, needing 26 pitches for his two innings. The Dodgers went on to win the game 8-2.

Ryu missed all of the 2015 season after undergoing shoulder surgery in May that year. He returned to the big league mound on July 7 last year but was shut down with elbow issues after giving up six runs on eight hits in 4 and 2/3 innings against the San Diego Padres.

On Saturday, Ryu retired leadoff man Eric Young Jr. on a groundout on two pitches, and then struck out Ben Revere and Danny Espinosa swinging to close out the inning.

After getting Jefry Marte to ground out to short to start the second, Ryu gave up a single to C.J. Cron.

He turned out to be the last base runner against Ryu, who got a line drive off the bat of Martin Maldonado for the second out. Shane Robinson then grounded out back to Ryu for the final out in the second.

Ryu touched 91 mph with his fastball and also mixed in sliders, changeups and curves.

Dodgers manager Dave Roberts was effusive in his praise of the Korean pitcher.

“I thought Ryu was good,” Roberts told MLB.com. “He got his pitch count up, he held his velocity, the fastball life was good, changed locations with it. If we could have envisioned a better outing, this was it.”