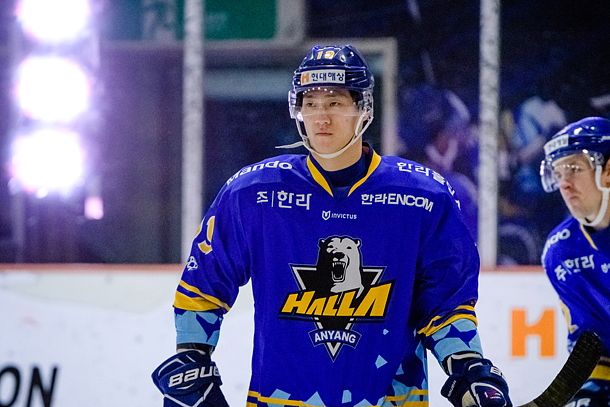 With 68 points, Kim Sang-wook became the first Korean ice hockey player to be a leader in total points in the Asia League Ice Hockey. [JOONGANG PHOTO]

Upon completion of the 2016-17 regular season on Sunday, Kim concluded his season recording 14 goals and 54 assists out of 48 games. With a total of 68 points, Kim tied for the lead with Matt Pope of the Tohoku Free Blades, who recorded 33 goals and 35 assists.

Kim also won the assist title by recording 54 assists, putting him ahead of Matt Murley of the Oji Eagles who recorded 44 assists. Not only was this Kim’s first time to win the league’s assist title, he is also the first Korean-born hockey player to top the assists ranking. Prior to Kim’s achievement, Song Dong-hwan, who is now retired, won the scoring title with 31 goals in the 2015-16 regular season.

After playing for Daemyung Sangmu, a military club, Kim returned to Anyang Halla and played all the games in the regular season with his brother, Kim Ki-sung. As Kim played a big role in helping Anyang Halla get the most winning points records, 120, Kim is a strong contender for the MVP award.

Matt Dalton, goaltender for Anyang Halla, is another contender for the MVP award as he recorded 1.68 goals against average (GAA) and 0.9399 shots saved by goalkeeper percentage (SSG). Dalton, a naturalized Korean goaltender, has also been a big help in the Korean ice hockey team as he helped the team earn a silver medal at the Sapporo Asian Winter Games last month.

Anyang Halla was created in 1994, joined the ALIH in 2003 and is Korea’s oldest hockey team as well as the ALIH’s best, as they’ve won the playoff series three times in 2010, 2011 and 2016, and won the regular season five times in 2009, 2010, 2015, 2016 and 2017. With the addition of naturalized athletes, the team has been dominating the league by winning the regular season three consecutive years. Anyang Halla hopes to continue this by winning the 2017 Asia League Championship.

The No. 1 and No. 2 teams, Anyang Halla and Sakhalin, will automatically advance to the semi-finals. The team that wins the first two games will advance to the finals which will be held on March 25.