Soloist finds his sweet spot : Minje Sung has made a career playing his double bass outside of the orchestra

Soloist finds his sweet spot : Minje Sung has made a career playing his double bass outside of the orchestra

Usually, the instrument known as the double bass, or contrabass, which sits in the very last row of the string section of an orchestra, is considered an instrument that simply supplies the harmonic and rhythmic foundation of the music with its low notes. As it’s so large, providing the lowest pitch among the string family, it hardly ever comes out to the center of the stage as a solo instrument.

But Korean double bassist Minje Sung has been slowly but incessantly changing that perception, or in his words the “misconception people have - even double bassists themselves - of the instrument that has such great potential to be under the spotlight.”

Whenever Sung comes on to the stage, he always wears a sleek suit, proving how a solo double bass performance can also be hip.

“It’s of course an orchestra instrument, but there’s a wide spectrum of opportunities for a double bass to be played solo,” said Sung at his practice studio in Gwangjin District, eastern Seoul when the Korea JoongAng Daily visited him last week for an interview. 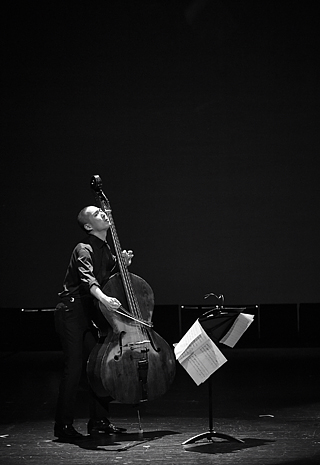 “But there are not many double bass soloists, not just in Korea but internationally. I guess it’s because double bass is a very, very difficult instrument to play, especially as a leading instrument.”

On Friday, Sung will stage a concert titled “Bass Inspiration” starting 7:30 p.m. at the Sejong Center of Performing Arts in central Seoul, as the first part of Sejong’s “Classic Generation” series.

To show the audience the many faces of the double bass, Sung has drawn up a program that starts off with a solo piece without any accompaniments, then some pieces in which he will be joined by other artists including violinist Danny Koo, pianist Gene Park and bass guitarist Jeff Kwon. The genre ranges from classical music, to jazz and Sung’s own composition.

“I came up with this program to show everything a double bass can do,” said Sung. “I play solo, a duet and a trio throughout the program. The audience will be able to see how a double bass can pull off such diverse techniques and produce different sounds with different instruments.”

Sung says the Friday concert will surprise audience members with how such a large instrument can come out to the front and “play” with other instruments “giving a kind of feeling that it’s flying around the stage.”

Although it ranges in size, the double bass is usually about two meters (6.56 feet) long, and weighs about 20 kilograms (3.15 stone). Due to its gigantic size, it is known to produce a bigger, warmer and deeper projecting sound. But at Sung’s upcoming concert, the audience will be able to hear almost all the notes that a double bass can produce as his fingers move up and down the long fingerboard of his double bass.

“It will be quite a refreshing performance for most audience members as it’s a rare opportunity to see a concert led by a double bass,” said Sung. Because it requires so much strength to play leading melodies on the bass, Sung says he works out regularly to put all his energy into his performance.

Although there are great double bass sonatas, Sung picked Brahm’s Sonata for Cello and Piano No. 1, as one of the pieces in the program.

“It is possible to play a cello sonata with the double bass, however, it’s difficult to play it well without making a mistake,” said Sung.

Despite this predicament, Sung says he picked the popular cello piece instead of a double bass sonata.

“Double bass sonatas are not well known enough by the general audiences to play them during the upcoming concert,” he said. “When the double bass itself as an instrument becomes familiar with the people, then, I want to introduce the beautiful double bass pieces.”

Sung will also showcase his own composition, “Going 2,” which has not been played elsewhere. It’s a duet piece for double bass and a bass guitar.

“I often meet up with my good friend Jeff Kwon who is a guitar player. And one day, we started talking about the music we like to listen to, which is music produced by a renowned label ECM and suddenly came up with an idea of doing something together,” said Sung. “So I came back to this studio and began writing the music on the spot. It’s a jazzy piece that will involve improvisation. It’ll be quite unique as many of the traditional techniques in classical and jazz music have been broken.”

Other pieces in the program include Piazzola’s Tango-Etude No. 3 and No. 4; as well as arranged versions of Offenbach’s “Jacqueline’s Tears,” Mozart’s “Lacrimosa” and “Summer No. 3” of Vivaldi’s Four Seasons.

During the concert, Sung will use two different double basses.

Growing up in a classical music family, with a father who was also a double bassist for the Seoul Philharmonic Orchestra, Sung says he picked up the instrument quite naturally as a young boy. Like his father, and many of his teachers, Sung too thought about joining an orchestra. But after becoming the first Asian winner of the International Johann Mattihias Sperger Competition for Double Bass in 2006 and the International Serge Koussevitzky Double Bass Competition the following year - two of three important international competitions for the double bass - Sung says it naturally led him to perform as a soloist.

“I didn’t know myself, until then, that double bassists can also make a career as a soloist without joining an orchestra,” said Sung. “Although I went this direction, I didn’t know if it was the right choice at that time because there’s no precedents. People around me told me that I should join an orchestra and then do solo concerts. That was what the existing double bass soloists did as well. But I wanted to take this as an opportunity to introduce the double bass as an instrument of diverse sounds to the general public.”