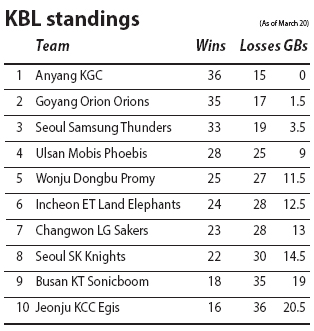 As the Korean Basketball League (KBL) regular season comes to an end, the Goyang Orion Orions made their last effort to win the regular season. The Orions have been undefeated for five consecutive games and got as close as 1.5 games from Anyang KGC, the top team in the KBL.

The Orions continued their winning streak this weekend against the Ulsan Mobis Phoebis, fourth ranked team in the league, 74-70. The Orions are now tied with the Phoebis this season as their head-to-head standing just improved to three wins and three ties.

Following a win, the team finished its weekend strong by winning its away game against the Seoul SK Knights on Sunday 71-62. The team’s season record has now improved to 35 wins and 17 losses.

Not only did the team shrink its gap from the top spot, the team widened its game from the third-ranked Seoul Samsung Thunders to 3.5 games.

After winning against the Knights, the Orions finalized their spot in the playoff series and will still be able to finish second even if they lose the next two games in the regular season. The Orions now look to win another playoff series, just as they won the 2015-16 season.

The team will close its regular season at home and will play against the Jeonju KCC Egis on Wednesday and Changwon LG Sakers on Sunday.

Upon completion of the regular season this weekend, the top six teams in the standing will advance to the playoff series.


As an “ace” forward, Lee Sung-hyun continues to be the Orions’ starting forward. 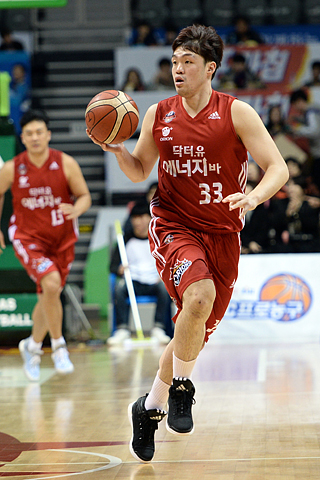 Looking at Lee’s past three seasons in the KBL, he has been one of the top players in the league, winning the rookie of the year award in 2014 and the MVP award after the Orions won the playoff championship. Prior to his KBL debut in 2014, Lee was drafted first by the Orions.

However, he had a rough mid-season, injuring his left ankle when the Orions played against the Incheon ET Land Elephants in January. His injury took him off the court for three weeks for treatment and rehabilitation.

In four games he played after his injury, Lee averaged 4.57 points per game. But it didn’t take long for Lee to regain his confidence.

During the game against the Thunders in Feb. 15, Lee scored 33 points with nine rebounds and four assists. Since then, he is back to being the Orions’ starting player.

Over the weekend, Lee led the team along with Aaron Haynes as he recorded 17 goals with eight rebounds and one assist against the Phoebis, and recorded 13 points and five rebounds against the Knights.

Also, Lee has been scoring double-digit points in the past four games for the Orions. With that, Lee has been averaging 11.6 points with 6.5 rebounds and 2.4 assists per game.

Before Lee leaves the team for military duty, he will have another chance to play in the playoff series to help the Orions win their second straight championship as well as another MVP award.