Prosecutors question Park for bribery and abuse of power

Prosecutors question Park for bribery and abuse of power 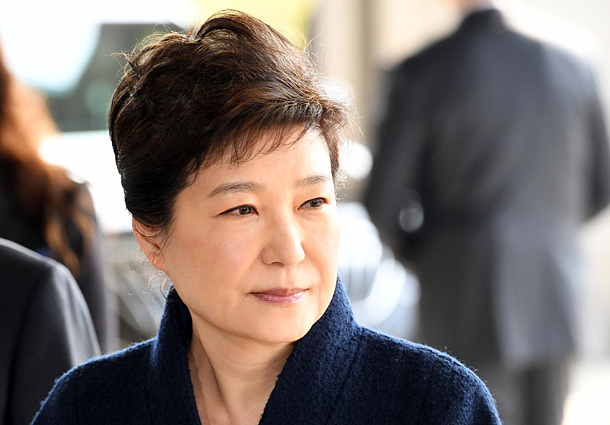 Park Geun-hye, ousted from her presidency earlier this month, was questioned Tuesday as a suspect in a bribery and abuse of power scandal.

Park, the first Korean president to be removed from office by impeachment, arrived at the Seoul Central District Prosecutors’ Office in southern Seoul around 9:25 a.m.

“I offer an apology to the people of our country,” Park said upon her arrival. “I will faithfully respond to the investigation.”

The questioning was expected to run for hours, as she is facing 13 charges. Last week, Park named six lawyers, all of whom represented her during the impeachment trial, to defend her.

The prosecution team started the initial probe at the end of last year and identified Park as a co-conspirator with her friend, Choi Soon-sil, in eight charges, including abuse of power, coercion and leaks of confidential documents. Independent counsel Park Young-soo continued the probe and handed over unfinished cases to the prosecution earlier this month.

The independent counsel investigation confirmed the charges and added allegations of bribery.

Park has denied all charges so far. Exiting the Blue House on March 12, she said, “Though it may take time, I believe the truth will eventually prevail.”

In the past months, Park also displayed her mistrust of the prosecution and independent counsel, claiming that the investigations were politically biased and that she was the victim of a “meticulous conspiracy.”

According to the prosecution, the questioning took place in an interrogation room on the 10th floor. She was accompanied by her lawyers. Park was first received by Roh Seung-kwon, deputy head of the Seoul Central District Prosecutors’ Office, for about 10 minutes, during which they had tea, before the questioning began.

Senior prosecutor Han Woong-jae, accompanied by a prosecutor and an investigator, questioned Park for about two hours and 30 minutes. This was followed by a lunch break. According to Park’s lawyer, she brought lunch from home, cooked by her former Blue House chef. The interrogation resumed at 1:10 p.m., and Han continued to question her.

The fundraising process of two nonprofit foundations, allegedly created and controlled by Choi and Park, was expected to be the key part of the investigation. Park was accused of receiving bribes from conglomerates through the two pet projects. A total of 77.4 billion won ($69.2 million) was collected from 50 companies, including Samsung Group.

Choi and Samsung’s head, Lee Jae-yong, are currently going through trials over the bribery scandal.

The prosecution said Tuesday that Park’s questioning is not being recorded on video, as she and her lawyers refused to consent to it.
“The prosecution has the right to make audio and video recordings of its questioning without seeking consent, but it asked, so we did not consent,” said Sohn Beok-gyu, one of Park’s lawyers. “No audio or video recording is being done now.”

A prosecution source said earlier this week that it could be more effective to question her without recording the session, if that would make the interrogation easier.

Prosecution sources have said the specific course of action to take in going after Park will be decided immediately after questioning, including a plan to seek a detention warrant against her.

Insiders of the legal community said there is more than enough reason for the prosecution to seek a warrant to detain Park, so the decision will be more political than anything else. Others involved in the scandal, including Choi and Lee, were all detained during their investigations.

The presidential election is scheduled for May 9 and campaigns have begun. Park’s detention could be a political game-changer, as her supporters – mostly conservative and elderly – are increasingly uniting.

Park is the fourth former Korean president to face prosecution. Roh Tae-woo was grilled on charges of creating massive slush funds during his term in November 1995, Chun Doo Hwan was questioned for mutiny and treason in December 1995 and Roh Moo-hyun was questioned in April 2009 over bribery allegations. He committed suicide shortly afterwards.

“There was no remorse or apology for being ousted by the Constitutional Court for this unprecedented scandal,” said Rep. Park Kyung-mee, spokeswoman of the Democratic Party. “There was no message to unite the public. The people became again embarrassed for having any expectation.”

Rep. Kim Kyung-jin, spokesman of the People’s Party, said Park’s insensitive two sentences demonstrated her failure to understand her role as a former president and the gravity of her political responsibility. “It clearly revealed that she is not repenting,” Kim said.

The Bareun Party said it was regretful that Park failed to offer a sincere apology. The Justice Party also said Park disappointed the public once again with her “insincere” remarks and that the prosecution must not go easy on her. The Liberty Korea Party, a conservative party that Park is still a member of, defended her, asking prosecutors to show the former president respect.

“She probably had many things to say, but appeared to restrain herself,” said Rep. Chung Woo-taik, LKP floor leader. Chung added that the prosecution “must also pay special attention to the respectful treatment and safety of the former president for the sake of the country’s dignity and unity.”