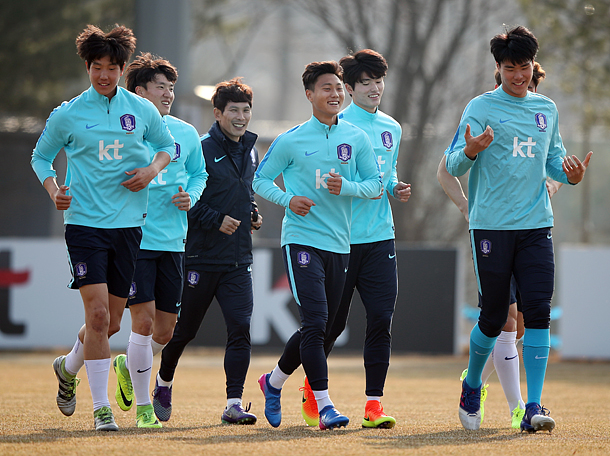 The U-20 Korean national football team trains at the National Football Center in Paju, Gyeonggi, on Sunday. [YONHAP]

Korea will host an international football tournament featuring Honduras, Zambia and Ecuador this week to fine-tune their preparations for the FIFA U-20 World Cup at home.

The U-20 national team was assembled on Sunday and has been training at the National Football Center in Paju, just north of Seoul, for the four-nation invitational tournament slated from Saturday to March 29.

Korea will open the four-team event with Honduras in Suwon, Gyeonggi Province, on Saturday, and will take on Zambia two days later in Cheonan, South Chungcheong Province. The U-20 team will wrap up the tournament with Ecuador in Seogwipo on Jeju Island on March 30. All of these matches will start at 7 p.m.

All four teams are participants of the U-20 World Cup.

Korea is placed in Group A with six-time World Cup winners Argentina, European giants England and African side Guinea. Zambia is paired with Portugal, Costa Rica and Iran in Group B, while Honduras are in Group E along with France, New Zealand and Vietnam. Ecuador will meet the United States, Senegal and Saudi Arabia in Group F.

Korea have faced Honduras and Ecuador only once each at the U-20 level - both with 2-1 wins - but have never played against Zambia.

These opponents are expected to give stern tests to the young Taeguk Warriors. Zambia topped the African qualification with five straight victories, while Honduras finished runners-up in their regional qualification behind the United States. Ecuador blanked Argentina 3-0 in the South American qualification and took second place behind Uruguay.

Korean head coach Shin Tae-yong has called up 27 players for the test event, and they will be competing for 21 spots on the final roster for the U-20 World Cup.

The players have gathered together more than a month after their training sessions in Portugal. Shin’s side posted two wins, two draws and one loss in five friendly matches there, including a 1-1 draw with the Portuguese U-20 team.

Shin, who led Korea to the quarterfinals at the 2016 Rio de Janeiro Olympics, took the helm of the U-20 team in November. He has been urging the players to “enjoy” football and has emphasized creativity.

“For the four-nation tournament, we will try to build harmony between existing players and new players,” coach Shin said. “New faces must prove their talent through this tournament.”