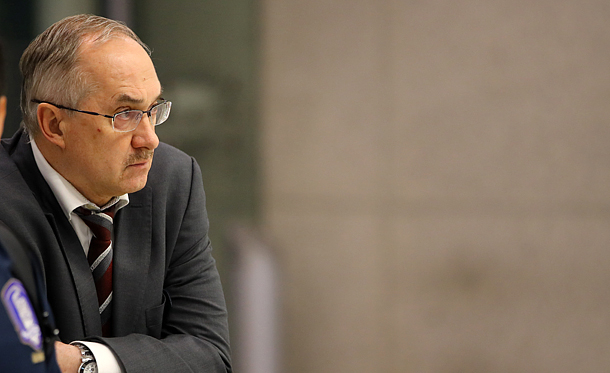 After Korea’s national football team lost 1-0 to China on Thursday, Uli Stielike, manager of the Korean team, was criticized by fans for his lacking coaching abilities. [YONHAP]

After the Korean football team suffered a stunning 1-0 loss to China in a FIFA World Cup qualifying match on Thursday, local football fans were quick to criticize the team’s skipper, Uli Stielike, and called for a new manager.

Chung Mong-kyu, president of the Korea Football Association, pushed back on Friday, saying the team had no plans to drop Stielike.

Still reeling from the bruising loss to China, ranked bottom in the group that Korea is competing in, fans have expressed outrage about Stielike’s lack of strategy, inconsistent player selection, unwillingness to accept blame and overall lack of morale throughout the match.

Ever since Stielike took up the managerial post in 2014, he’s been keeping the same 4-2-3-1 formation, with Lee Jeong-hyeop of Busan IPark at the front. If the game isn’t going well, Stielike calls in Kim Shin-wook of Jeonbuk Hyundai Motors. The coach has continuously played this long ball strategy, which many criticize as boring and predictable.

“When Korea put in Kim Shin-wook, Marcello Lippi [the Chinese team’s coach] changed to a 4-4-1-1 formation from 4-3-3 right away and blocked Korea’s long ball play,” said Kim Ho, manager of Yongin FC and former manager of the Korean football team in the 1994 World Cup. 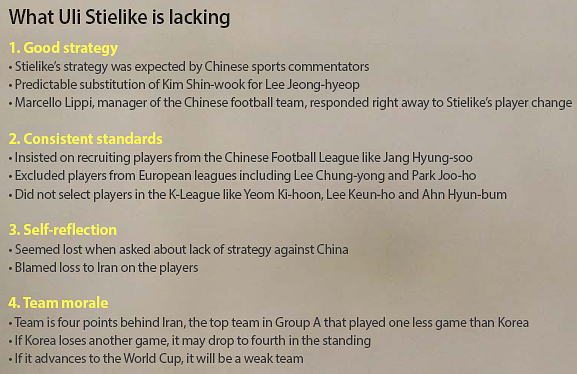 Stielike has come under criticism for his choice of players, too. Rather than selecting active footballers from the K-League like Suwon Samsung Bluewings winger Yeom Ki-hun, Jeju United forward Ahn Hyun-beom or Gangwon FC striker Lee Keun-ho, Stielike has insisted on recruiting Korean players from the Chinese Football League, whose skill levels were rated lower after playing in China.

The coach has also gotten flack for avoiding responsibility after losses. When one reporter asked about his strategy after the game against China, Stielike shot back, saying there was no other way to counter China’s three forwards than a full-back formation.

His rancorous response was similar to a postgame complaint made in October after the Korean team’s loss to Iran. Stielike blamed the lack of a strong striker like Sebastian Soria of Al-Rayyan SC for the loss.

Korea is now second in Group A with three wins, one tie and two losses and has 10 points. While the top two teams in the group will advance to the 2018 FIFA World Cup, Korea’s position in second is precarious. The squad is only one point ahead of Uzbekistan and two ahead of Syria.

For the Korean squad, losing is no longer an option.

“Players and the coaching staff have to change,” said Ki Sung-yueng, center midfielder for Swansea City and captain of the Korean football team. “If not, we won’t be able to get to the World Cup.”

The team’s next qualifier is against Syria on Tuesday, and the squad is feeling the heat. “If mistakes are continuously made, then it becomes their ability,” said Kim Hwan, a football commentator for cable network JTBC. “Stielike’s lack of ability was shown in the game against China.”

Kim quipped that if Korea were to advance to the World Cup at the level it’s playing right now, the team will simply be a “point machine” feeding goals to other teams.

Since the Korean team has a lot of time to prepare for its game against Qatar after playing Syria on Tuesday, fans argue a replacement of the manager should be considered. But Stielike isn’t backing down just yet.

“I’ve been working in the football community for more than 40 years, and I know how it’s difficult to serve as a coach,” Stielike said before practice on Friday at the National Football Center in Paju, Gyeonggi. “I know there are talks about my position, but I’m not going to think about that right now. My only focus is to go to the World Cup with this team.”