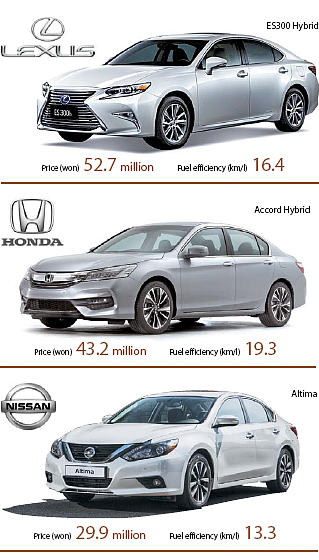 German automakers have long dominated Korea’s import market, but ever since Volkswagen’s emissions scandal broke out two years ago, their sales have taken a hit, giving Japanese companies an opening to make a comeback with their own hybrid models.

Though German brands with diesel engines still top the import market, Japanese automakers saw their sales improve slightly last year as more Koreans have begun questioning the reliability of diesel engines and younger consumers are showing a growing preference for more environment-friendly and fuel-efficient vehicles. The recent arrival of Tesla is expected to further fuel such preferences.

Last year, sales of imported diesel cars fell 21.2 percent from the previous year to 130,000, according to the Korea Automobile Importers & Distributors Association. The vacancy was filled by hybrid cars, which saw sales jump 66.1 percent last year to 16,000.

“The diesel scandal and the trend of eco-friendly cars have towed the sales growth at Lexus and Toyota since we have strong lineup of hybrids,” said Kwak Ji-sung, a spokeswoman for the Japanese carmaker’s Korean unit. Toyota’s Camry Hybrid and Lexus’ ES300 Hybrid were the best-selling models, according to the spokeswoman.

“Riding on the trend, Toyota and Lexus will continue to target the Korean market with hybrid models in the future,” she said.

Honda, which also has a strong lineup of hybrid models, made the Accord Hybrid the focus of its sales effort this year. Honda Korea’s goal is to sell 1,200 Accord Hybrids.

Japanese companies, though, have a steep hill to climb if they want to catch up to leading German brands. While Japanese cars have a strong foothold in the global auto market for their durability and quiet engines - Toyota was the best-selling brand in 2015 - their popularity is not as high in Korea. For the past decade, Japanese brands including Toyota, Lexus, Nissan, Infiniti and Honda each held market shares in the single digits, while BMW and Mercedes-Benz each exceeded 15 percent.

Lexus, Toyota’s premium brand with a market share of 4.7 percent, was the only Japanese automaker that managed to surpass 10,000 sales last year. By comparison, Mercedes-Benz sold 56,343 cars and BMW 48,459. The Japanese automakers even underperformed against Volkswagen and Audi, which faced sales bans in Korea after the government discovered the companies had fudged emissions data. Volkswagen sold 13,178 cars and Audi 16,718. Toyota sold nearly half that, 9,265 cars, accounting for 4.1 percent of the import market; Honda sold 6,636 cars with 2.95 market share; and premium brand Infiniti sold 3,201 cars, making up 1.42 percent of the market.

“Japanese cars tend to be less appealing to Korean customers for various reasons,” said Kim Pil-soo, a professor of automotive engineering at Daelim University, “but in the global market, they are strong players known for their cost-effectiveness and durability.”

In Korea, many consumers perceive local automakers like Hyundai and Kia as having similar specs as Japanese ones but with a lower price point, making them more appealing. For keen buyers of import cars, who are often more concerned about the brand image than the specs, Japanese cars don’t have the kind of cache that German cars have.

There was a time when competition between Japanese and German automakers was fiercer than it is now. In 2004, Toyota was neck and neck against top-selling import brand BMW, behind by just 1 percentage point with 22 percent market share. It was impressive considering the automaker first stepped into Korea with its luxury brand Lexus in 2000.

But sales dropped after Toyota’s massive recalls in late 2009 and early 2010 over various safety issues including out-of-place floor mats and faulty accelerator pedals. The worldwide recalls tarnished the reputation of Japanese brands in Korea.

At the same time, German brands began aggressively marketing their diesel engines. They claimed the engines had stronger performance and were more environmentally-friendly than hybrid engines that were still in development at the time. They said the engines also had better mileage. As the diesel cars entered the Korean market, the popularity of Japanese cars, with their gasoline engines, took a noticeable tumble.

It was around this time, too, that Korean automakers were working to improve their quality after decades of derision from global consumers. Chung Mong-koo, the chairman of Hyundai Motor Group which includes Hyundai Motor and Kia Motors, noticed the fall of Toyota from a single scandal and led a drive at the company to enhance quality control.

As Korean cars improved, their credibility among domestic consumers went up as well, further reducing the Japan’s hold on the market.