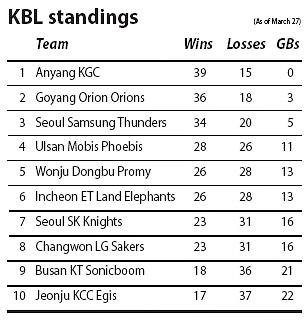 The top six teams advancing to the Championship games has been finalized.

Upon completion of the regular season on Sunday, the Anyang KGC was declared the regular season champion for the first time in team history. Though they were awarded the title on Thursday, they still finished the season strong by winning against Busan KT Sonicboom, 83-78, the team’s ninth consecutive win. They set a new record for the most consecutive wins in the KBL.

Although the Goyang Orion Orions finished second in the standings, they hope to defend their title in the Championship series once again. After a disappointing loss to Jeonju KCC Egis, the lowest ranked team in the league, the Orions lost their chance of winning the regular season title. But the Orions closed its season with a win against the Changwon LG Sakers 95-85 on Sunday. 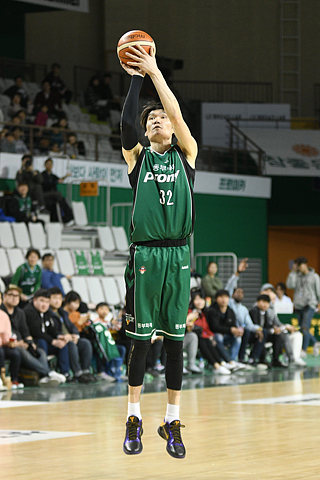 Despite a successful 2015-16 season, the Egis finished the 2016-17 campaign last in the league. This was Egis’ first time in 20 years completing the season at the bottom of the field. But despite the team’s failure to collect wins, Andre Emmett was the KBL’s regular season leading scorer, averaging 28.80 points per game.

The playoff series will begin on Thursday with the Ulsan Mobis Phoebis playing against the Wonju Dongbu Promy.

It took Kim, playing his 15th season in the KBL, 688 games to achieve the record. Although it took him longer than Seo Jang-hoon, who achieved the record in 462 games, he achieved the feat faster than Choo Seung-gyun, who got to 10,000 points in 736 games.

In the Promy’s second-to-last regular season game against the LG Changwon Sakers on Thursday, Kim recorded 11 points with one rebound and one assist to help the team win.

During the game against the Seoul SK Knights on Sunday, Kim took a free throw 2 minutes and 41 seconds into the first quarter. Successfully making the shot, Kim made his 10,000th career point. Although the team lost to the Knights, Kim recorded seven points with one rebound and two assists.