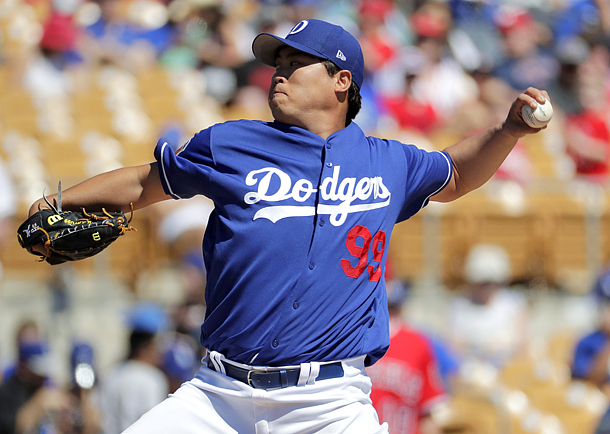 Ryu Hyun-jin of the LA Dodgers pitches against the LA Angels during the first inning of a spring training exhibition game in Phoenix, Arizona on March 11. [AP/YONHAP]

After two surgeries, Ryu Hyun-jin of the L.A. Dodgers successfully earned a spot in the Dodgers’ starting rotation for its upcoming Major League Baseball (MLB) season on Tuesday.

In the Dodger’s recent game against the Chicago White Sox, Ryu gave up two home runs, four hits and three runs in five innings at Camelback Ranch in Glendale, Arizona, on Monday. During the game, Ryu threw 77 pitches, not allowing a walk, and had four strikeouts. Other than a careless pitch that led to two home runs, Ryu had another successful day on the mound. With his performance, his ERA raised from 1.00 to 2.57.

Although he gave up a home run at the beginning of the game, Ryu kept himself steady and pitched five innings, the highest number of innings he has pitched in a game throughout the exhibition games so far this season. Upon completion of the game, Dave Roberts, manager of the Dodgers, gave Ryu a passing mark and expressed his satisfaction in Ryu’s pitching.

“He gave up a couple home runs, but he felt good coming out of it,” Roberts said in a post game interview with MLB.com. “The command needs to be cleaned up obviously and get better, but for us, it’s how it comes out.”

With that, Alex Wood and Brandon McCarthy will now fight for the fifth and final spot in the starting rotation.

Ryu made his professional debut in the Korean Baseball Organization (KBO) with Hanwha Eagles in 2006 and recorded 98 wins-52 losses with 2.80 ERA and 1,238 strikeouts. After a dominant KBO career, Ryu signed a six-year $36 million contract with the Dodgers before the 2013 season. In Ryu’s first season with the Dodgers, he produced 28 wins and became the first Korean to be the starting pitcher in an MLB postseason game.

But in the 2015 season, Ryu struggled to recover from his left shoulder surgery, something often fatal for baseball players. Since there weren’t many pitchers making successful returns after shoulder surgeries, many had doubts over Ryu’s chances. However, through the spring training exhibition games, he made an outstanding comeback as he pitched a fastball at a highest speed of 148 kilometers per hour (92 miles) and showed control in change-up. Ryu’s trust in his health has led him to confidence.